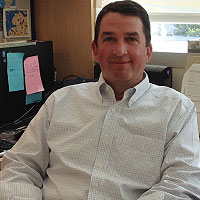 In addition to serving as director of the Genomics and Computational Biology Core (GCBC) and providing bioinformatics support for researchers at both the NIDCD and National Institute of Dental and Craniofacial Research (NIDCR), Dr. Morell conducts research on animal models of genes that cause hereditary hearing loss in humans. Hereditary hearing loss is a highly heterogeneous disorder, with well over 100 genes known to cause deafness in humans. Most of the identified genes encode proteins, and to understand how those mutations cause deafness, one must understand the normal functions of the proteins and their contributions to the architecture and physiology of the auditory system. Some of the mutations that cause deafness, however, operate at the level of gene regulation. The goal of the GCBC’s study, Molecular and Epigenetic Mechanisms of Hereditary Hearing Loss, is to understand the patterns of gene regulation in the cochlea, and how certain mutations perturb normal regulation and cause deafness.