Using animal models, scientists have demonstrated that a protein called Emx2 is critical to how specialized cells that are important for maintaining hearing and balance are positioned in the inner ear. Emx2 is a transcription factor, a type of protein that plays a role in how genes are regulated. Conducted by scientists at the National Institute on Deafness and Other Communication Disorders (NIDCD), part of the National Institutes of Health (NIH), the research offers new insight into how specialized sensory hair cells develop and function, providing opportunities for scientists to explore novel ways to treat hearing loss, balance disorders, and deafness. The results are published March 7, 2017, in eLife.

Our ability to hear and maintain balance relies on thousands of sensory hair cells in various parts of the inner ear. On top of each hair cell is a group of tiny hair-like structures called stereocilia, also called a hair cell bundle. When triggered by sound, head movements, or other input, the hair cell bundles bend, opening channels that turn on the hair cells and create electrical signals to send information to the brain. These signals carry, for example, sound vibrations so the brain can tell us what we’ve heard or information about how our head is positioned or how it is moving, which the brain uses to help us maintain balance.

NIDCD researchers Doris Wu, Ph.D., chief of the Section on Sensory Cell Regeneration and Development; Katie Kindt, Ph.D., acting chief of the Section on Sensory Cell Development and Function; and Tao Jiang, a doctoral student at the University of Maryland College Park, sought to describe how the hair cells and hair cell bundles in the inner ear are formed by exploring the role of Emx2, a protein known to be essential for the development of inner ear structures. They turned first to mice, which have been critical to helping scientists understand how intricate parts of the inner ear function in people. 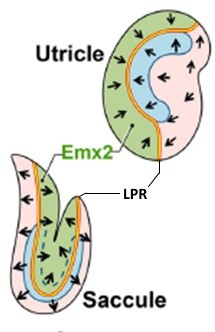 Looking to other animals to see if Emx2 played the same role, they found that Emx2 reversed hair cell bundle orientation in the zebrafish neuromast, the organ where hair cells with reversed polarity that are sensitive to water movement reside.

These results suggest that Emx2 plays a key role in establishing the structural basis of hair cell bundle polarity and establishing the LPR. If Emx2 is found to function similarly in humans, as expected, the findings could help advance therapies for hearing loss and balance disorders. They could also advance research into understanding the mechanisms underlying sensory hair cell development within organs other than the inner ear.

This work was supported within the intramural laboratories of the NIDCD (ZIA DC000021 and ZIA DC000085).