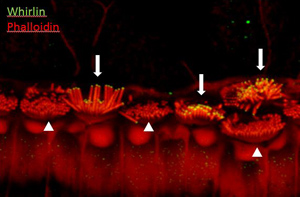 For the first time, scientists have used gene therapy to correct defective structures in the inner ears of newborn mice, according to results of a new study by researchers from the National Institute on Deafness and Other Communication Disorders (NIDCD), part of the National Institutes of Health. The mice had a type of hereditary deafness also found in humans.

Hair cells are small sensory cells of the inner ear that transform sound vibrations into nerve impulses. After sound waves enter the inner ear’s cochlea, they produce waves in a fluid layer.  The waves lift the overlying hair cells, and bend tiny hair-like structures on the hair cell surfaces—called stereocilia—by driving them into an overlying membrane. Bending the stereocilia triggers an electrical signal that is sent to the brain and interpreted as sound.

For the new research, Wade Chien, M.D., FACS, an otolaryngology surgeon-scientist in the Inner Ear Gene Therapy Program at the NIDCD, and his team studied newborn mice that inherited a mutated gene for a hair cell protein called whirlin. Both people and mice who inherit mutated whirlin genes have abnormally short, fat stereocilia, arranged in extra rows. Because of the stereocilia abnormalities, these hair cells begin to die off shortly after birth. In humans, the whirlin mutation may cause either deafness or Usher syndrome, in which the mutation causes both deafness and blindness. In normal ears, stereocilia are graded in height to form a staircase-like bundle. The size, organization, and survival of the stereocilia are critical to hearing.

Scientists injected gene therapy via a virus carrying the corrected gene for the whirlin protein into the inner ear of mice with the whirlin mutation (whirler mice).  Although the gene therapy had minimal effect on treated adult whirler mice, the scientists found that gene therapy in newborn whirler mice restored stereocilia to their normal length and eliminated some of the extra rows of stereocilia. In addition, more hair cells survived in the treated ear as compared to the untreated ear in the same mouse. Unfortunately, mice that received gene therapy demonstrated no improvement in hearing ability when tested one to three months after treatment.

Now the scientists will try to determine why correcting the architecture of the stereocilia and improving the survival of the hair cells does not restore hearing ability in whirler mice. They will also work to improve gene therapy.

This work was supported within the intramural laboratories of the NIDCD (grants 1ZIADC000082-03, 1ZIADC000079-04, and 1ZIADC000039-18.) Dr. Chien is supported by the NIDCD Otolaryngology Surgeon-Scientist Program. The NIDCD Mouse Auditory Testing Core Facility provided additional support.