What are assistive devices?

The terms assistive device or assistive technology can refer to any device that helps a person with hearing loss or a voice, speech, or language disorder to communicate. These terms often refer to devices that help a person to hear and understand what is being said more clearly or to express thoughts more easily. With the development of digital and wireless technologies, more and more devices are becoming available to help people with hearing, voice, speech, and language disorders communicate more meaningfully and participate more fully in their daily lives.

What types of assistive devices are available?

Health professionals use a variety of names to describe assistive devices:

What types of assistive listening devices are available?

Several types of ALDs are available to improve sound transmission for people with hearing loss. Some are designed for large facilities such as classrooms, theaters, places of worship, and airports. Other types are intended for personal use in small settings and for one-on-one conversations. All can be used with or without hearing aids or a cochlear implant. ALD systems for large facilities include hearing loop systems, frequency-modulated (FM) systems, and infrared systems. 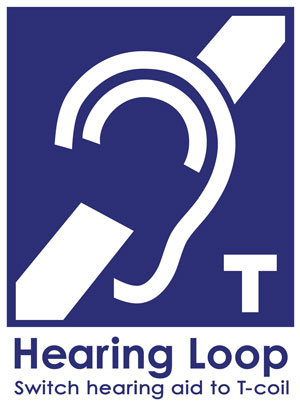 This logo informs people that a public area is looped.
Source: HearingLoop.org

Amplified sound travels through the loop and creates an electromagnetic field that is picked up directly by a hearing loop receiver or a telecoil (see sidebar), a miniature wireless receiver that is built into many hearing aids and cochlear implants. To pick up the signal, a listener must be wearing the receiver and be within or near the loop. Because the sound is picked up directly by the receiver, the sound is much clearer, without as much of the competing background noise associated with many listening environments. Some loop systems are portable, making it possible for people with hearing loss to improve their listening environments, as needed, as they proceed with their daily activities. A hearing loop can be connected to a public address system, a television, or any other audio source. For those who don’t have hearing aids with embedded telecoils, portable loop receivers are also available.

A telecoil, also called a t-coil, is a coil of wire that is installed inside many hearing aids and cochlear implants to act as a miniature wireless receiver. It was originally designed to make sounds clearer to a listener over the telephone. It also is used with a variety of other assistive listening devices, such as hearing loop (or induction loop) systems, FM systems, infrared systems, and personal amplifiers.

The telecoil works by receiving an electromagnetic signal from the hearing loop and then turning it back into sound within the hearing aid or cochlear implant. This process eliminates much of the distracting background noise and delivers sound customized for one’s own need. For people who are hard-of-hearing who do not have a telecoil-equipped hearing aid or cochlear implant, loop receivers with headsets can provide similar benefits but without the customized or “corrected sound” feature that matches one’s hearing loss pattern.

Many cochlear implants have a telecoil built into the sound processor, or can use an external telecoil accessory with both hearing aid compatible telephones and public loop systems. A simple switch or programming maneuver performed by the user activates this function.

FM systems use radio signals to transmit amplified sounds. They are often used in classrooms, where the instructor wears a small microphone connected to a transmitter and the student wears the receiver, which is tuned to a specific frequency, or channel. People who have a telecoil inside their hearing aid or cochlear implant may also wear a wire around the neck (called a neckloop) or behind their aid or implant (called a silhouette inductor) to convert the signal into magnetic signals that can be picked up directly by the telecoil. FM systems can transmit signals up to 300 feet and are able to be used in many public places. However, because radio signals are able to penetrate walls, listeners in one room may need to listen to a different channel than those in another room to avoid receiving mixed signals. Personal FM systems operate in the same way as larger scale systems and can be used to help people with hearing loss to follow one-on-one conversations.

Infrared systems use infrared light to transmit sound. A transmitter converts sound into a light signal and beams it to a receiver that is worn by a listener. The receiver decodes the infrared signal back to sound. As with FM systems, people whose hearing aids or cochlear implants have a telecoil may also wear a neckloop or silhouette inductor to convert the infrared signal into a magnetic signal, which can be picked up through their telecoil. Unlike induction loop or FM systems, the infrared signal cannot pass through walls, making it particularly useful in courtrooms, where confidential information is often discussed, and in buildings where competing signals can be a problem, such as classrooms or movie theaters. However, infrared systems cannot be used in environments with too many competing light sources, such as outdoors or in strongly lit rooms.

Personal amplifiers are useful in places in which the above systems are unavailable or when watching TV, being outdoors, or traveling in a car. About the size of a cell phone, these devices increase sound levels and reduce background noise for a listener. Some have directional microphones that can be angled toward a speaker or other source of sound. As with other ALDs, the amplified sound can be picked up by a receiver that the listener is wearing, either as a headset or as earbuds.

What types of augmentative and alternative communication devices are available for communicating face-to-face?

The simplest AAC device is a picture board or touch screen that uses pictures or symbols of typical items and activities that make up a person’s daily life. For example, a person might touch the image of a glass to ask for a drink. Many picture boards can be customized and expanded based on a person’s age, education, occupation, and interests.

Keyboards, touch screens, and sometimes a person’s limited speech may be used to communicate desired words. Some devices employ a text display. The display panel typically faces outward so that two people can exchange information while facing each other. Spelling and word prediction software can make it faster and easier to enter information.

Speech-generating devices go one step further by translating words or pictures into speech. Some models allow users to choose from several different voices, such as male or female, child or adult, and even some regional accents. Some devices employ a vocabulary of prerecorded words while others have an unlimited vocabulary, synthesizing speech as words are typed in. Software programs that convert personal computers into speaking devices are also available.

What augmentative and alternative communication devices are available for communicating by telephone?

For many years, people with hearing loss have used text telephone or telecommunications devices, called TTY or TDD machines, to communicate by phone. This same technology also benefits people with speech difficulties. A TTY machine consists of a typewriter keyboard that displays typed conversations onto a readout panel or printed on paper. Callers will either type messages to each other over the system or, if a call recipient does not have a TTY machine, use the national toll-free telecommunications relay service at 711 to communicate. (See Telecommunications Relay Services for more information.) Through the relay service, a communications assistant serves as a bridge between two callers, reading typed messages aloud to the person with hearing while transcribing what’s spoken into type for the person with hearing loss.

With today’s new electronic communication devices, however, TTY machines have almost become a thing of the past. People can place phone calls through the telecommunications relay service using almost any device with a keypad, including a laptop, personal digital assistant, and cell phone. Text messaging has also become a popular method of communication, skipping the relay service altogether.

Another system uses voice recognition software and an extensive library of video clips depicting American Sign Language to translate a signer’s words into text or computer-generated speech in real time. It is also able to translate spoken words back into sign language or text.

Finally, for people with mild to moderate hearing loss, captioned telephones allow you to carry on a spoken conversation, while providing a transcript of the other person’s words on a readout panel or computer screen as back-up.

What types of alerting devices are available?

Alerting or alarm devices use sound, light, vibrations, or a combination of these techniques to let someone know when a particular event is occurring. Clocks and wake-up alarm systems allow a person to choose to wake up to flashing lights, horns, or a gentle shaking.

Visual alert signalers monitor a variety of household devices and other sounds, such as doorbells and telephones. When the phone rings, the visual alert signaler will be activated and will vibrate or flash a light to let people know. In addition, remote receivers placed around the house can alert a person from any room. Portable vibrating pagers can let parents and caretakers know when a baby is crying. Some baby monitoring devices analyze a baby’s cry and light up a picture to indicate if the baby sounds hungry, bored, or sleepy.

What research is being conducted on assistive technology?

The National Institute on Deafness and Other Communication Disorders (NIDCD) funds research into several areas of assistive technology, such as those described below.

Where can I get more information?

Use the following keywords to help you search for organizations that can answer questions and provide printed or electronic information on assistive devices: