What is Usher syndrome?

Usher syndrome is the most common condition that affects both hearing and vision; sometimes it also affects balance. The major symptoms of Usher syndrome are deafness or hearing loss and an eye disease called retinitis pigmentosa (RP) [re-tin-EYE-tis pig-men-TOE-sa].

RP initially causes night-blindness and a loss of peripheral (side) vision through the progressive degeneration of cells in the retina. The retina is the light-sensitive tissue at the back of the eye and is crucial for vision. As RP progresses, the field of vision narrows until only central vision remains, a condition called tunnel vision. Cysts in the macula [MAC-u-la] (the central part of the retina) and cataracts (clouding of the lens) can sometimes cause an early decline in central vision in people with Usher syndrome. 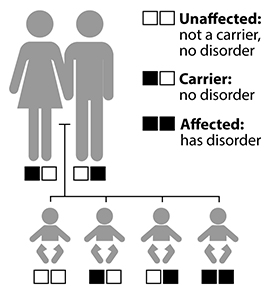 Chances of inheriting a recessive disorder

The hearing, balance, and vision of carriers with one mutant Usher gene is typically normal. Carriers are often unaware of their status.

Who is affected by Usher syndrome?

Usher syndrome is inherited, which means that it is passed from parents to a child through genes. Each person inherits two copies of a gene, one from each parent. Sometimes genes are altered, or mutated. Mutated genes may cause cells to develop or act abnormally.

Usher syndrome is inherited as an autosomal recessive disorder. “Autosomal” means that men and women are equally likely to have the disorder and equally likely to pass it on to a child of either sex. “Recessive” means that the condition occurs only when a child inherits two copies of the same faulty gene, one from each parent. A person with one abnormal Usher gene does not have the disorder but is a carrier who has a 50 percent chance of passing on the abnormal gene to each child. When two carriers with the same mutated Usher syndrome gene have a child together, each birth has a:

What are the characteristics of the three types of Usher syndrome?

Type 1: Children with type 1 Usher syndrome have profound hearing loss or deafness at birth and have severe balance problems. Many obtain little or no benefit from hearing aids but may be candidates for a cochlear implant—an electronic device that can provide a sense of sound to people with severe hearing loss or deafness. (For more information, read the NIDCD fact sheet Cochlear Implants.) Parents should consult with their child’s doctor and other hearing health professionals early to determine communication options for their child. Intervention should begin promptly, when the brain is most receptive to learning language, whether spoken or signed.

How is Usher syndrome diagnosed?

Diagnosis of Usher syndrome involves pertinent questions regarding the person’s medical history and testing of hearing, balance, and vision. Early diagnosis is important, as it improves treatment success. An eye care specialist can use dilating drops to examine the retina for signs of RP. Visual field testing measures peripheral vision. An electroretinogram [e-lec-tro-RET-in-o-gram] measures the electrical response of the eye’s light-sensitive cells in the retina. Optical coherence tomography may be helpful to assess for macular cystic changes. Videonystagmography [vi-de-o-nigh-stag-MAH-gra-fee] measures involuntary eye movements that could signify a balance problem. Audiology testing determines hearing sensitivity at a range of frequencies.

How is Usher syndrome treated?

Vitamin A may slow the progression of RP, according to results from a long-term clinical trial supported by the National Eye Institute and the Foundation Fighting Blindness.6 Based on the study, adults with a common form of RP may benefit from a daily supplement of 15,000 IU (international units) of the palmitate form of vitamin A. Patients should discuss this treatment option with their health care provider before proceeding. Because people with type 1 Usher syndrome did not take part in the study, high-dose vitamin A is not recommended for these patients.

General precautions for vitamin A supplementation:

What research is being conducted on Usher syndrome?

Researchers are trying to identify additional genes that cause Usher syndrome. Efforts will lead to improved genetic counseling and earlier diagnosis, and may eventually expand treatment options.

Other areas of study include developing new methods for early identification of children with Usher syndrome, improving treatment strategies for children who use hearing aids or cochlear implants for hearing loss, and testing innovative intervention strategies to help slow or stop the progression of RP. Clinical researchers are also characterizing variability in balance among individuals with various types of Usher syndrome.

Visit the NIH Clinical Research Trials and You website to read about these and other clinical trials that are recruiting volunteers.

Where can I get more information about Usher syndrome?

6 Berson, E.L. (1998). Treatment of retinitis pigmentosa with vitamin A. Digital Journal of Ophthalmology, 4(7).

*Note: PDF files require a viewer such as the free Adobe Reader