What is sudden deafness?

Sudden sensorineural (“inner ear”) hearing loss (SSHL), commonly known as sudden deafness, is an unexplained, rapid loss of hearing either all at once or over a few days. SSHL happens because there is something wrong with the sensory organs of the inner ear. Sudden deafness frequently affects only one ear.

People with SSHL often discover the hearing loss upon waking up in the morning. Others first notice it when they try to use the deafened ear, such as when they use a phone. Still others notice a loud, alarming “pop” just before their hearing disappears. People with sudden deafness may also notice one or more of these symptoms: a feeling of ear fullness, dizziness, and/or a ringing in their ears, such as tinnitus. (For more information, read the NIDCD fact sheet Tinnitus.)

Sometimes, people with SSHL put off seeing a doctor because they think their hearing loss is due to allergies, a sinus infection, earwax plugging the ear canal, or other common conditions. However, you should consider sudden deafness symptoms a medical emergency and visit a doctor immediately. Although about half of people with SSHL recover some or all their hearing spontaneously, usually within one to two weeks from onset, delaying SSHL diagnosis and treatment (when warranted) can decrease treatment effectiveness. Receiving timely treatment greatly increases the chance that you will recover at least some of your hearing.

Experts estimate that SSHL strikes between one and six people per 5,000 every year, but the actual number of new SSHL cases each year could be much higher because SSHL often goes undiagnosed. SSHL can happen to people at any age, but most often affects adults in their late 40s and early 50s.

A variety of disorders affecting the ear can cause SSHL, but only about 10 percent of people diagnosed with SSHL have an identifiable cause.

Some of these conditions include:

Most of these causes are accompanied by other medical conditions or symptoms that point to the correct diagnosis. Another factor to consider is whether hearing loss happens in one or both ears. For example, if sudden hearing loss occurs only in one ear, tumors on the auditory nerve should be ruled out as the cause. Autoimmune disease may cause SSHL in one or both ears. 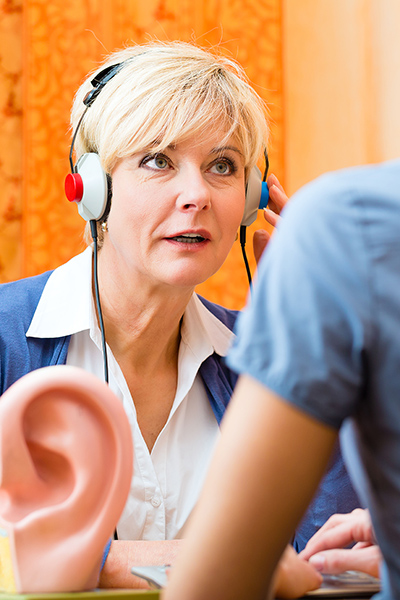 How is sudden deafness diagnosed?

With pure tone audiometry, your doctor can measure how loud different frequencies, or pitches, of sounds need to be before you can hear them. One sign of SSHL could be the loss of at least 30 decibels (decibels are a measure of sound intensity) in three connected frequencies within 72 hours. This drop would, for example, make conversational speech sound like a whisper. Patients may have more subtle, sudden changes in their hearing and may be diagnosed with other tests.

If you are diagnosed with sudden deafness, your doctor will probably order additional tests to try to determine an underlying cause for your SSHL. These tests may include blood tests, imaging (usually magnetic resonance imaging, or MRI), and balance tests.

How is sudden deafness treated?

The most common treatment for sudden deafness, especially when the cause is unknown, is corticosteroids. Steroids can treat many disorders and usually work by reducing inflammation, decreasing swelling, and helping the body fight illness. Previously, steroids were given in pill form. In 2011, a clinical trial supported by the NIDCD showed that intratympanic (through the eardrum) injection of steroids was as effective as oral steroids. After this study, doctors started prescribing direct intratympanic injection of steroids into the middle ear; the medication then flows into the inner ear. The injections can be performed in the offices of many otolaryngologists, and are a good option for people who cannot take oral steroids or want to avoid their side effects.

Steroids should be used as soon as possible for the best effect and may even be recommended before all test results come back. Treatment that is delayed for more than two to four weeks is less likely to reverse or reduce permanent hearing loss.

Additional treatments may be needed if your doctor discovers an underlying cause of your SSHL. For example, if SSHL is caused by an infection, the doctor may prescribe antibiotics. If you took drugs that were toxic to the ear, you may be advised to switch to another drug. If an autoimmune condition caused your immune system to attack the inner ear, the doctor may prescribe drugs that suppress the immune system.

If your hearing loss is severe, does not respond to treatment, and/or happens in both ears, your doctor may recommend that you use hearing aids (to amplify sound) or even receive cochlear implants (to directly stimulate the auditory connections in the ear that go to the brain). For more information, read the NIDCD fact sheets Hearing Aids and Cochlear Implants.

What research does the NIDCD support on sudden deafness?

Since so little is known about the causes of most cases of SSHL, researchers are considering different types, risk factors, and causes of SSHL. For instance, researchers are studying how changes in the inner ear, such as disrupted blood flow or inflammation, may contribute to hearing loss. Researchers are also testing new ways to use imaging to help diagnose SSHL and potentially detect its causes.

NIDCD-funded researchers are also trying to improve ways of dispensing drugs into the inner ear by intratympanic injections. Scientists are developing ways to infuse drugs into tiny microspheres that can slowly release the drug. This would allow doctors to give a single injection of a slow-releasing drug into the ear rather than several injections of a traditional fast-releasing drug. Another team of scientists is studying the use of magnets to push drug-infused particles into and throughout the inner ear, distributing the drug more evenly and effectively. Visit the NIH Clinical Research Trials and You website to read about these and other clinical trials that are recruiting volunteers.

Where can I find additional information about sudden deafness?