What is Ménière’s disease?

Ménière’s disease is a disorder of the inner ear that causes severe dizziness (vertigo), ringing in the ears (tinnitus), hearing loss, and a feeling of fullness or congestion in the ear. Ménière’s disease usually affects only one ear.

Attacks of dizziness may come on suddenly or after a short period of tinnitus or muffled hearing. Some people will have single attacks of dizziness separated by long periods of time. Others may experience many attacks closer together over a number of days. Some people with Ménière’s disease have vertigo so extreme that they lose their balance and fall. These episodes are called “drop attacks.”

Ménière’s disease can develop at any age, but it is more likely to happen to adults between 40 and 60 years of age. The National Institute on Deafness and Other Communication Disorders (NIDCD) estimates that approximately 615,000 individuals in the United States are currently diagnosed with Ménière’s disease and that 45,500 cases are newly diagnosed each year.

What causes the symptoms of Ménière’s disease? 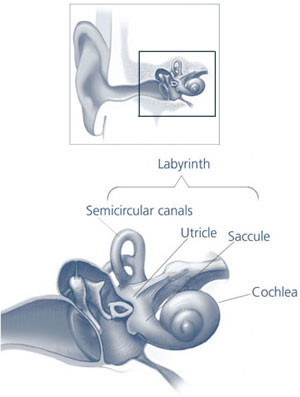 The labyrinth in relation to the ear

The labyrinth is composed of the semicircular canals, the otolithic organs (i.e., utricle and saccule), and the cochlea. Inside their walls (bony labyrinth) are thin, pliable tubes and sacs (membranous labyrinth) filled with endolymph.

The symptoms of Ménière’s disease are caused by the buildup of fluid in the compartments of the inner ear, called the labyrinth. The labyrinth contains the organs of balance (the semicircular canals and otolithic organs) and of hearing (the cochlea). It has two sections: the bony labyrinth and the membranous labyrinth. The membranous labyrinth is filled with a fluid called endolymph that, in the balance organs, stimulates receptors as the body moves. The receptors then send signals to the brain about the body’s position and movement. In the cochlea, fluid is compressed in response to sound vibrations, which stimulates sensory cells that send signals to the brain.

In Ménière’s disease, the endolymph buildup in the labyrinth interferes with the normal balance and hearing signals between the inner ear and the brain. This abnormality causes vertigo and other symptoms of Ménière’s disease.

Why do people get Ménière’s disease?

How does a doctor diagnose Ménière’s disease?

Ménière’s disease is most often diagnosed and treated by an otolaryngologist (commonly called an ear, nose, and throat doctor, or ENT). However, there is no definitive test or single symptom that a doctor can use to make the diagnosis. Diagnosis is based upon your medical history and the presence of:

Some doctors will perform a hearing test to establish the extent of hearing loss caused by Ménière’s disease. To rule out other diseases, a doctor also might request magnetic resonance imaging (MRI) or computed tomography (CT) scans of the brain.

How is Ménière’s disease treated?

Ménière’s disease does not have a cure yet, but your doctor might recommend some of the treatments below to help you cope with the condition.

What is the outlook for someone with Ménière’s disease?

Scientists estimate that six out of 10 people either get better on their own or can control their vertigo with diet, drugs, or devices. However, a small group of people with Ménière’s disease will get relief only by undergoing surgery.

What research about Ménière’s disease is being done?

Insights into the biological mechanisms in the inner ear that cause Ménière’s disease will guide scientists as they develop preventive strategies and more effective treatment. The NIDCD is supporting scientific research across the country that is:

Where can I find additional information about Ménière’ disease?

NIDCD maintains a directory of organizations that can answer questions and provide printed or electronic information on Ménière’s. Please see the list of organizations at www.nidcd.nih.gov/directory.

Use the following keywords to help you search for organizations that can answer questions and provide printed or electronic information on Ménière’s disease: