What is recurrent respiratory papillomatosis?

Recurrent respiratory papillomatosis (RRP) is a disease in which benign (noncancerous) tumors called papillomas grow in the air passages leading from the nose and mouth into the lungs (respiratory tract). Although the tumors can grow anywhere in the respiratory tract, they most commonly grow in the larynx (voice box)—a condition called laryngeal papillomatosis. The papillomas may vary in size and grow very quickly. They often grow back after they have been removed.

RRP is caused by two types of human papilloma virus (HPV): HPV 6 and HPV 11. There are more than 150 types of HPV, and they do not all have the same symptoms.

Most people who encounter HPV never develop a related illness. However, in a small number of people exposed to the HPV 6 or 11 virus, respiratory tract papillomas and genital warts can form. Although scientists do not fully understand why some people develop the disease and others do not, the virus is thought to be spread through sexual contact or when a mother with genital warts passes the HPV 6 or 11 virus to her baby during childbirth.

Who is affected by RRP?

RRP may occur in adults (adult-onset RRP) as well as in infants and small children (juvenile-onset RRP) who may have contracted the virus during childbirth. The RRP Foundation estimates that there are roughly 20,000 active cases in the United States. According to the Centers for Disease Control and Prevention (CDC), estimates of the incidence for juvenile-onset RRP are imprecise but range from two or fewer cases per 100,000 children under age 18. Even less is known about the incidence of the adult form of RRP. Estimates of the incidence for adult-onset RPP range between two to three cases per 100,000 adults in the U.S.

What are the symptoms of RRP? 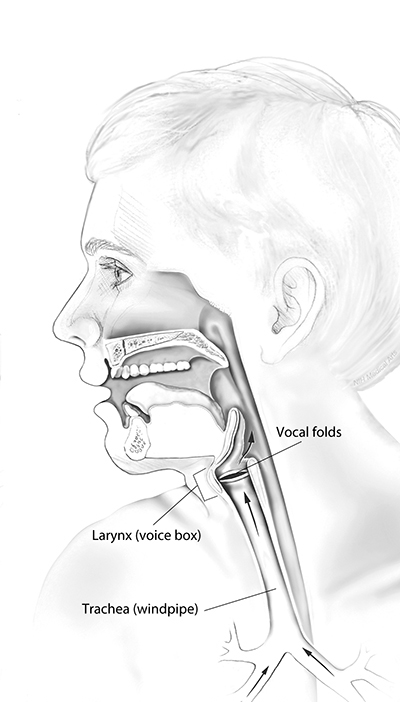 Parts of the respiratory tract affected by RRP

Normally, the human voice is produced when air from the lungs is pushed through two side-by-side specialized muscles—called vocal folds—with enough pressure to cause them to vibrate (see illustration). Hoarseness, the most common RRP symptom, is caused when RRP papillomas interfere with the normal vibrations of the vocal folds. Eventually, RRP tumors may block the airway passage and cause difficulty breathing.

RRP symptoms tend to be more severe in children than in adults. Because the tumors grow quickly, young children with the disease may find it difficult to breathe when sleeping, or they may have difficulty swallowing. Some children experience some relief or remission of the disease when they begin puberty. Both children and adults may experience hoarseness, chronic coughing, or breathing problems. Because of the similarity of the symptoms, RRP is sometimes misdiagnosed as asthma or chronic bronchitis.

How is RRP diagnosed?

Health professionals use two routine tests for RRP: indirect and direct laryngoscopy. In an indirect laryngoscopy, an otolaryngologist—a doctor who specializes in diseases of the ear, nose, throat, head, and neck—or speech-language pathologist will typically insert a fiberoptic telescope, called an endoscope, into a patient’s nose or mouth and then view the larynx on a monitor. Some medical professionals use a video camera attached to this endoscope to view and record the exam. An older, less common method is for the otolaryngologist to place a small mirror in the back of the throat and angle the mirror down toward the larynx to inspect it for papillomas.

A direct laryngoscopy is conducted in the operating room with the use of general anesthesia. This method allows the otolaryngologist to view the vocal folds and other parts of the larynx under high magnification. This procedure is usually used to minimize discomfort, especially with children, or to enable the doctor to biopsy tissue samples from the larynx or other parts of the throat to obtain a diagnosis of RRP.

How is RRP prevented or treated?

Vaccination with the HPV vaccine could prevent the development of RRP. The CDC currently recommends that all children (both boys and girls) receive the HPV vaccine at age 11 or 12. Ask your child’s doctor whether the type of HPV vaccine your child will receive will protect against HPV 6 and 11. As more young people receive the vaccine, future research will reveal its effectiveness in preventing HPV-associated diseases such as RRP.

Once RRP develops, there is currently no cure. Surgery is the primary method for removing tumors from the larynx or airway. Because traditional surgery can cause problems due to scarring of the larynx tissue, many surgeons now use laser surgery. Carbon dioxide (CO2) or potassium titanyl phosphate (KTP) lasers are frequently used for this purpose. Surgeons also commonly use a device called a microdebrider, which uses suction to hold the tumor in place while a small internal rotary blade removes the growth.

Once the tumors have been removed, they can still return. It is common for patients to require multiple surgeries. With some patients, surgery may be required every few weeks in order to keep the breathing passage open, while others may require surgery only once a year or even less frequently.

In the most extreme cases of aggressive tumor growth, a tracheotomy may be performed. A tracheotomy is a surgical procedure in which an incision is made in the front of the patient’s neck and a breathing tube (trach tube) is inserted through an opening, called a stoma, into the trachea (windpipe). Rather than breathing through the nose and mouth, the patient will now breathe through the trach tube. Although the trach tube keeps the breathing passage open, doctors try to remove it as soon as possible.

In severe cases of RRP, therapies in addition to surgery may be used. Drug treatments may include antivirals such as interferon and cidofovir, which block the virus from making copies of itself; indole-3-carbinol, a cancer-fighting compound found in cruciferous vegetables such as broccoli and brussels sprouts; or bevacizumab, which targets the blood vessel growth of papilloma. To date, the results of these and other nonsurgical therapies have been mixed or not yet fully proven.

What research is being conducted on RRP?

Scientists and clinicians are working to discover more about RRP. While HPV 6 and HPV 11 are known causes, millions of people are exposed to these two viruses without developing the disease. It is not known why some people are more at risk than others or why some cases are much more serious than others.

Researchers funded by the National Institute on Deafness and Other Communication Disorders (NIDCD) are conducting research studies to explore how HVP 6 and HVP 11 evade the immune system and cause RRP. In another NIDCD-supported study, scientists aim to decipher the precise ways in which cells infected with HVP 6 and HVP 11 multiply and grow into tumors. Eventually, research may help to develop new vaccine strategies to treat or prevent RRP.

New clinical trials, one of which is being conducted at the NIH Clinical Center, are investigating whether immunotherapies originally developed to treat patients with cancer (immune checkpoint inhibitors) can be used to activate the immune system against HPV-infected papilloma cells. Visit the NIH Clinical Research Trials and You website to read about these and other clinical trials that are recruiting volunteers.

Where can I find additional information about RRP?