This is your brain on freestyle rap: NIDCD study reveals characteristic brain patterns of lyrical improvisation 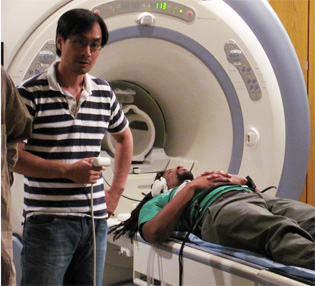 NIDCD researcher Ho Ming Chow (standing) with
rapper Mike Eagle, who is about to find out what his
brain looks like when he's freestyling.

Researchers in the voice, speech, and language branch of the National Institute on Deafness and Other Communication Disorders (NIDCD) at the National Institutes of Health (NIH) have used functional magnetic resonance imaging to study the brain activity of rappers when they are “freestyling”—spontaneously improvising lyrics in real time. The findings, published online in the November 15 issue of the journal Scientific Reports, reveal that this form of vocal improvisation is associated with a unique functional reallocation of brain activity in the prefrontal cortex and proposes a novel neural network that appears to be intimately involved in improvisatory and creative endeavors.

The researchers, led by Siyuan Liu, Ph.D., scanned the brains of 12 freestyle rap artists (who had at least 5 years of rapping experience) while they performed two tasks using an identical 8-bar musical track. For the first task, they improvised rhyming lyrics and rhythmic patterns guided only by the beat. In the second task, they performed a well-rehearsed set of lyrics.

During freestyle rapping, the researchers observed increases in brain activity in the medial prefrontal cortex, a brain region responsible for motivation of thought and action, but decreased activity in dorsolateral prefrontal regions that normally play a supervisory or monitoring role. Like an experienced parent who knows when to lay down the law and when to look the other way, these shifts in brain function may facilitate the free expression of thoughts and words without the usual neural constraints.

Freestyling also increased brain activity in the perisylvian system (involved in language production), the amygdala (an area of the brain linked to emotion), and cingulate motor areas, suggesting that improvisation engages a brain network that links motivation, language, mood, and action. Further studies of this network in other art forms that involve the innovative use of language, such as poetry and storytelling, could offer more insights into the initial, improvisatory phase of the creative process.