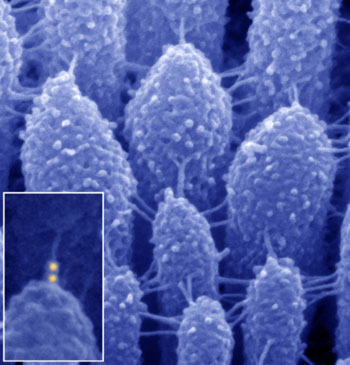 Scanning electron microscopy image illustrates
tiny extracellular links between stereocilia of an
inner ear hair cell. One type of link, the tip link,
connects the top of the shorter stereocilium to the
side of a longer stereocilium and is crucial for hearing.
The yellow dots in the inset are the immuno-gold
particles that label specific proteins comprising
the tip link. (Credit: G. Frolenkov, Ph.D.)

A team of NIH-supported researchers is the first to show, in mice, an unexpected two-step process that happens during the growth and regeneration of inner ear tip links. Tip links are extracellular tethers that link stereocilia, the tiny sensory projections on inner ear hair cells that convert sound into electrical signals, and play a key role in hearing. The discovery offers a possible mechanism for potential interventions that could preserve hearing in people whose hearing loss is caused by genetic disorders related to tip link dysfunction. The work was supported by the National Institute on Deafness and Other Communication Disorders (NIDCD), a component of the National Institutes of Health.

The findings appear in the June 11, 2013 online edition of PLoS
Biology

. The senior author of this study is Gregory I. Frolenkov, an associate professor in the College of Medicine at the University of Kentucky, Lexington, and his fellow, Artur A. Indzhykulian, Ph.D., is the lead author.

Stereocilia are bundles of bristly projections that extend from the tops of sensory cells, called hair cells, in the inner ear. Each stereocilia bundle is arranged in three neat rows that rise from lowest to highest like stair steps. Tip links are tiny thread-like strands that link the tip of a shorter stereocilium to the side of the taller one behind it. When sound vibrations enter the inner ear, the stereocilia, connected by the tip links, all lean to the same side and open special channels, called mechanotransduction channels. These pore-like openings allow potassium and calcium ions to enter the hair cell and kick off an electrical signal that eventually travels to the brain, where it is interpreted as sound.

The findings build on a number of recent discoveries in laboratories at the NIDCD and elsewhere that have carefully plotted the structure and function of tip links and the proteins that comprise them. Earlier studies had shown that tip links are made up of two proteins—cadherin-23 (CDH23) and protocadherin-15 (PCDH15)—that join to make the link, with PCDH15 at the bottom of the tip link at the site of the mechanotransduction channel, and CDH23 on the upper end. Scientists assumed that the assembly was static and stable once the two proteins bonded.

Tip links break easily with exposure to noise. But unlike hair cells, which can’t regenerate in humans, tip links repair themselves, mostly within a matter of hours. The breaking of tip links, and their regeneration, has been known for many years, and is seen as one of the causes of the temporary hearing loss you might experience after a loud blast of sound (or a loud concert). Once the tip links regenerate, hair cell function returns, usually to normal levels. What scientists didn’t know was how the tip link reassembled.

To study tip link assembly, the researchers treated young, postnatal (5-7 days) mouse sensory hair cells with BAPTA—a substance that, like loud noise, damages and disrupts tip links. To image the proteins, the group pioneered an improved scanning electron microscopy (SEM) technique of immunogold labeling that uses antibodies bound to gold particles that attach to the proteins. Then, using SEM, they imaged the cells at high resolution to determine the positions of the proteins before, during, and after BAPTA treatment.

What the researchers found was that after a tip link is chemically disrupted, a new tip link forms, but instead of the normal combination of CDH23 and PCDH15, the link is made up of PCDH15 proteins at both ends. Over the next 24 hours, the PCDH15 protein at the upper end is replaced by CDH23 and the tip link is back to normal.

Why tip links regenerate using a two-step instead of a neat one-step process is not known. For reasons that are still unclear, CDH23 disappears from stereocilia after noise damage while PDCH15 stays around.  Looking to regenerate quickly, the lower PDCH15 latches onto another PDCH15, forming a shorter and functionally slightly weaker tip link. Later, at some time during the 36 hours after the damage, when CDH23 returns, PDCH15 gives up its provisional partner and latches onto its much stronger mate in CDH23. In other words, PDCH15 prefers to be with CDH23, but in a pinch it will bond weakly with another bit of PDCH15 until CDH23 shows up.

The researchers coupled the SEM observations with electrophysiology studies to show how the functional properties of the tip links changed throughout this two-step process. The temporary PCDH15/PCDH15 tip link has a slightly different functional response than the permanent PDCH15/CDH23 combination. Researchers were able to correlate the differences in function with the protein combinations that make up the tip link.

Additional experiments revealed that when hair cells develop, the tip links use the same two-step process.

Previous research has shown that both CDH23 and PCDH15 are required for normal hearing and vision. In fact, NIDCD scientists in earlier studies have shown that mutations in either of these genes can cause the hearing loss or deaf-blindness found in Usher Syndrome types 1D and 1F.

“In the case of deaf individuals who are unable to make functional CDH23, knowledge of this new temporary alliance of PCDH15 proteins to form a weaker, but still functional, tip link could inform treatments that would encourage the double PCDH15 bond to become permanent and maintain at least limited hearing,” said Tom Friedman, Ph.D., chief of the Laboratory of Molecular Genetics at the NIDCD, where the research began.

The NIDCD supports and conducts research and research training on the normal and disordered processes of hearing, balance, taste, smell, voice, speech, and language and provides health information, based upon scientific discovery, to the public. For more information about NIDCD programs, see our website.

About the National Institutes of Health (NIH): NIH, the nation's medical research agency, includes 27 Institutes and Centers and is a component of the U.S. Department of Health and Human Services. NIH is the primary federal agency conducting and supporting basic, clinical, and translational medical research, and is investigating the causes, treatments, and cures for both common and rare diseases. Visit the NIH website for more information about NIH and its programs.