NIDCD scientists honored for contributions to The Cancer Genome Atlas 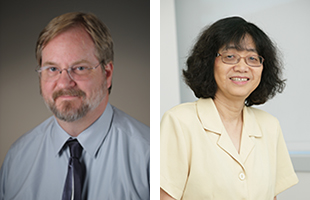 Carter Van Waes, M.D., Ph.D., and Zhong Chen, M.D., Ph.D., of the Head and Neck Surgery Branch (HNSB) at the National Institute on Deafness and Other Communication Disorders (NIDCD), have received a 2020 Team Science Award from the American Association for Cancer Research (AACR) for their contributions to The Cancer Genome Atlas (TCGA).

Presented June 24 during the AACR Virtual Annual Meeting, this award recognized 130 scientists on the current project team for their extensive collaborations and ongoing efforts to generate one of the largest-ever sets of tumor characterization data and use it to transform cancer research and care. TCGA is a joint effort of the National Institutes of Health’s National Cancer Institute (NCI) and National Human Genome Research Institute (NHGRI).

NIH Director Francis S. Collins, M.D., Ph.D., was also recognized with an AACR Team Science Award honoring the pioneers and leaders of TCGA. Dr. Collins was one of two cofounders of TCGA, which was established in 2006 while he was NHGRI director.

After more than a decade of work by more than 150 TCGA researchers at institutions across North America, TCGA scientists have created molecular maps of more than 20,000 primary cancer and matched normal samples spanning 33 cancer types, laying the foundation for precision cancer medicine.

Among the seminal papers were the results of the PanCancer Atlas study of squamous cell carcinomas led by Dr. Van Waes, HNSB chief and NIDCD’s clinical director, and Dr. Chen, staff scientist. The NIDCD researchers also served as writing coordinators for and contributors to the TCGA report on the genomics of head and neck cancers highlighted on the cover of the January 29, 2015, issue of Nature.

Squamous cell carcinomas, which comprise 90 percent of head and neck cancers, are the most prevalent cancers that affect human communication, particularly voice and speech. Head and neck cancers and their treatments can also cause severe problems with chewing and swallowing.

Drs. Van Waes and Chen led a team of more than 50 researchers who identified molecular characteristics that distinguish the genomic profiles of squamous cell carcinomas from the head and neck, and other body sites. This research is critical for developing more effective diagnoses and targeted treatment strategies for squamous cell carcinomas and other specific cancer subtypes.