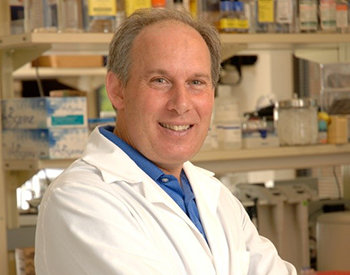 Dennis Drayna, Ph.D., retired after 22 years of research and service at the NIDCD. Drayna led pioneering research in the genetics of taste, stuttering, and pitch perception.

Drayna earned a bachelor’s degree from the University of Wisconsin-Madison in 1975, followed by a Ph.D. from Harvard University in 1981. As a postdoctoral fellow at the University of Utah, Drayna created the first genetic linkage map of a human chromosome. In his work, he developed a map of the human X chromosome, which helped define the genetic locations of many X-linked diseases, such as Duchenne muscular dystrophy. This pioneering work paved the way for the Human Genome Project, which began with a map and went on to produce the sequence of the entire human genome. In 1985, Drayna moved into the biotechnology industry, joining the research department at Genentech. There, he made several important discoveries in human cholesterol metabolism.

In 1992, Drayna transitioned from Genentech to serve as co-founder and director of research at Mercator Genetics in Menlo Park, California. In 1996, the Mercator team identified the gene that causes hereditary hemochromatosis, a disorder that causes excessive iron absorption; left untreated, it can lead to organ damage and death. While hemochromatosis is easily treatable, diagnosing patients is difficult. Symptoms vary and can easily be mistaken for other common disorders. Genetic tests for hemochromatosis greatly improved the diagnosis and ability to treat this disorder, and these tests are now widely implemented in clinical medicine.

When Drayna first joined the NIH, he was hosted in the lab of NHGRI Director Eric D. Green, M.D., Ph.D., where he began developing his own research program. “Having Dennis working in my lab was one of the most intellectually rich experiences of my early career,” noted Green at Drayna’s May 31 retirement symposium.

At the NIDCD, Drayna was engaged by the wide range of research areas within the institute. Fascinated by advances in the molecular understanding of taste perception, Drayna identified the gene that specifies our ability to taste the bitter compound phenylthiocarbamide, or PTC, which had been a well-known variable human trait for almost a century. He went on to find gene variants related to preference for sweet tastes, and he worked with industry to better adapt flavoring products for palatability and healthy outcomes in diverse populations. Dr. Drayna also held a long-standing interest in auditory pitch perception. He used twin data to show that the inability to recognize musical pitches, also called tune deafness, was highly heritable.

Drayna said, “The NIDCD may be a small institute, but it has an exceptionally high-quality intramural research program. I’ve found the scientific mission both fascinating and compelling, and the close involvement of clinical experts with basic laboratory scientists has been a real highlight of my research here.”

While many geneticists stop once they have found gene variants associated with a disorder, “Dennis strives to go beyond this, asking what the responsible genes can reveal about pathways involved in that disorder,” said Simon E. Fisher, D.Phil., director of the Department of Language and Genetics at the Max Planck Institute for Psycholinguistics.

Perhaps the best example of this is Drayna’s work on stuttering. He and his colleagues spent years doggedly pursuing the genetic origins of stuttering, studying families across the world. This work paid off when they serially identified genes that currently account for about 20 percent of persistent stuttering cases. They didn’t stop there, though; by looking at what these genes did, they provided insight into the cellular mechanisms of stuttering, which had been largely unknown.

Drayna’s work is helping to change the perception of stuttering. Rather than the perception that stuttering is a psychological manifestation of anxiety or personal shortcoming, people with persistent stuttering can now point to a possible biological cause for their symptoms.

Drayna has always been dedicated to sharing his science and its impacts on human health with mentees, colleagues across the NIH, the public, and the media. He has been quoted around the world in many of the most prominent media outlets. His interest in stuttering extends to his charitable activities outside the NIH, where he has served as a member of the board of directors of the Stuttering Foundation of America since 2006.

“Dennis cares as much about the community as the science,” reflected Elyssa Monzack, Ph.D., chief of staff of the NIDCD Division of Intramural Research.