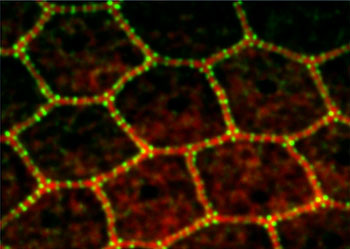 A new finding from NIH researchers has uncovered a never-before seen method of intracellular physical communication among epithelial cells in the inner ear. The finding could offer scientists a potential new pathway for developing ways to treat hearing loss and diseases in many different organ systems. The research was supported in part by the intramural division of the National Institute on Deafness and Other Communication Disorders (NIDCD), a component of the NIH, and was published in the April 22, 2013, issue of Current Biology.

Epithelial cells line our internal organs and passages to the outside world, such as the throat and nose, and act as a protective shield against germs and injury. They also play an active role in some of our sensory organs, such as the ear, where they are a key part of structures that allow us to hear.

Each epithelial cell in the body has a ‘cord’ that wraps around its boundary, called the epithelial belt. This belt can tighten or relax, changing the cell’s size and shape.

Researchers know that two muscle proteins, myosin and actin, play a role in powering the movement of the epithelial belt. Now, a study led by Bechara Kachar, Ph.D., chief of the NIDCD Laboratory of Cell Structure and Dynamics, has shown that these two proteins form a remarkably precise chain-like configuration within the belt similar to that found in muscle cells. These chains extend across adjacent cells, allowing whole sheets of epithelial tissue to coordinate clear-cut changes in tension and shape.

The interlinked chains form a network across the entire epithelium, according to Seham Ebrahim, Ph.D., a visiting fellow in Dr. Kachar’s lab and co-leading author of the study. “Any contraction or relaxation happening to one cell,” says Dr. Ebrahim, “isn’t just a local effect, but is transmitted to the whole epithelial sheet to make sure all the cells are always in sync.”

Using a mouse model, the researchers examined the epithelial belt in the organ of Corti, the part of the inner ear that shelters the sensory hair cells that turn the mechanical vibrations of sound into nerve impulses. The researchers tagged two types of myosin with fluorescent probes, and then used powerful microscopes to visualize the order of the molecules within and between each cell.

These advanced techniques showed the precise links between epithelial cells. When the researchers used a drug to force the epithelial belt to relax, they were able to reveal that these links coordinate a dynamic dance that changes the tension between cells. In a relaxed state, the subunits making up the connections between cells maintained precise—if wider—spacing. When tension was restored, the subunits slid back into place.

The scientists found the same linkage patterns between epithelial cells in the intestines and stomach, indicating that this coordination likely exists in organs throughout the body.

Mutations in the genes for the types of myosin studied in these experiments have been linked to many human diseases, not only hearing loss, and their mechanisms offer  potential new pathways for developing interventions to treat diseases or disorders of the ear, eye, and lungs (among others) related to dysfunction in the epithelial sheet.

The study was also supported by the intramural division of the NIH’s National Heart, Lung, and Blood Institute (NHLBI) and the Ministry of Education, Culture, Sports, Science and Technology/Japan Society for the Promotion of Science.