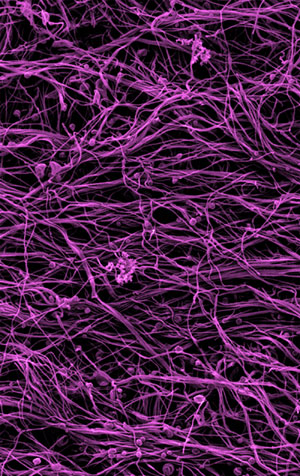 A dense mat of cilia—magnified
1,500 times—stretches across the
surface of the olfactory epithelium, the
tissue in the nose involved in the sense
of smell.
Credit: University of Michigan

Scientists funded by the National Institutes of Health have restored the ability to smell in a mouse model of a human genetic disorder that causes congenital anosmia—the inability to smell from birth. The approach uses gene therapy to regrow cilia, cell structures that are essential for olfactory function.

“These results could lead to one of the first therapeutic options for treating people with congenital anosmia,” said James F. Battey, Jr., M.D., Ph.D., director of the NIDCD. “They also set the stage for therapeutic approaches to treating diseases that involve cilia dysfunction in other organ systems, many of which can be fatal if left untreated.”

Olfactory dysfunction can be a symptom of a newly recognized class of genetic disorders, known as ciliopathies, which include diseases as diverse as polycystic kidney disease and retinitis pigmentosa, an inherited, degenerative eye disease that causes severe vision impairment and blindness. The disorders are caused by defects in cilia, antenna-like projections on cells that help them sense their environment.  Scientists believe that nearly every cell in the body has the capacity to grow one or more cilia. In the olfactory system, multiple cilia project from olfactory sensory neurons, sensory cells that are found in the olfactory epithelium, tissue high up in the nasal cavity. Receptors that bind odorants are localized on the cilia, which is why a loss of cilia results in a loss in the ability to smell.

The team of researchers, led by Jeffrey R. Martens, Ph.D., at the University of Michigan, Ann Arbor, and Jeremy C. McIntyre, Ph.D., a post-doctoral fellow in Martens’ laboratory, worked with a mouse model carrying a mutation in the IFT88 gene. The mutation causes a decrease in the IFT88 protein, which leads to a dramatic reduction in cilia function in several different organ systems, including the olfactory system.

The researchers used an adenovirus to introduce a healthy copy of the gene as a way to restore IFT88 protein levels in the mice. They wanted to see if the reintroduction of the lost protein could restore cilia to the olfactory sensory neurons and return the ability to smell. For three consecutive days, the mice received intranasal gene delivery therapy and then were allowed 10 days for the infected sensory neurons to express the viral-encoded IFT88 protein. After that time, the mice were tested with increasing concentrations of an odorant (amyl acetate). Their responses were measured at the cellular, tissue, and synaptic levels, which all indicated that the mice had regained olfactory function.

The change in olfactory function also has implications in the feeding behavior of the mice. The mouse model the scientists used is born underweight and its anosmia interferes with the motivation to eat, which in many mammals, including humans, is driven by smell.  Treatment with adenovirus therapy increased bodyweight by 60 percent in treated compared to untreated  mice, indicating that the restored olfactory function was motivating feeding.

The researchers plan to continue their work by developing another mouse model to look at the impact on olfactory function and the potential for restoring function when the IFT88 gene is completely missing, rather than just mutated. Future studies could begin to plot a way to bring this therapeutic tactic to human study volunteers, which could eventually restore the sense of smell, and a better quality of life, to people who are born with anosmia. Further research could also advance the treatments for other ciliopathies, as these findings show that gene therapy is a viable option for the functional rescue of cilia in established, already differentiated cells.

For more information about anosmia, see the NIDCD fact sheet on Smell Disorders.

The NIDCD supports and conducts research and research training on the normal and disordered processes of hearing, balance, taste, smell, voice, speech and language and provides health information, based upon scientific discovery, to the public. For more information about NIDCD programs, see the website at http://www.nidcd.nih.gov.

About the National Institutes of Health (NIH): NIH, the nation's medical research agency, includes 27 Institutes and Centers and is a component of the U.S. Department of Health and Human Services. NIH is the primary federal agency conducting and supporting basic, clinical, and translational medical research, and is investigating the causes, treatments, and cures for both common and rare diseases. For more information about NIH and its programs, visit http://www.nih.gov.