Tinnitus: Is this what happens when the brain's gatekeeper breaks down?

Why some people with hearing loss develop tinnitus—a buzzing or ringing sound in the ears in the absence of any real sound—and others don’t has puzzled scientists for years. Almost all cases of tinnitus are preceded by a loss of hearing as the result of damage to the inner ear from aging, injury, or long-term exposure to loud noise, but experts estimate that only a third of those with hearing loss will go on to develop tinnitus. That amounts to nearly 23 million American adults annually in the United States. 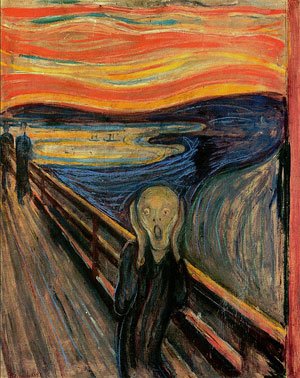 Tinnitus is a ringing in the ears that won’t go away.
(The Scream, Edvard Münch, 1893)

Researchers funded by an NIDCD challenge grant from the American Recovery and Reinvestment Act (ARRA) are suggesting a novel theory to explain why some people are more vulnerable to tinnitus than others. They propose that the limbic system—a linked network of brain structures involved in emotion, behavior, and long-term memory—acts as a gatekeeper to keep the tinnitus signal from reaching the auditory cortex, the part of the brain that mediates our conscious perception of sounds. In people with tinnitus, they suggest, the gate has broken. Their findings are published in the January 13, 2011, issue of Neuron.

Josef Rauschecker, Ph.D., D.Sc., and his colleagues in the Department of Neuroscience, the Division of Audiology, and the Department of Otolaryngology at Georgetown University used the ARRA grant money to pursue something they’d seen in previous brain imaging studies. They had noted a significant loss of volume in the medial prefrontal cortex (mPFC), an area located in the frontal lobe of the brain, of people with tinnitus. The finding was intriguing because although this isn’t an area of the brain that processes sound, it is an area that has the potential to modulate sensory information—such as sound—because of its intimate connections with key structures in the limbic system.

The fact that tissue loss in this particular area was a prominent feature was puzzling, but changes had been noted before in other structures associated with the limbic system in people with tinnitus. Previous researchers had tended to interpret the involvement of the limbic system as a reflection of the emotional reaction to the sound. The depression that often accompanies tinnitus (and that has deep roots in the limbic system) was seen as a normal reaction to an upsetting condition that wouldn’t go away. Dr. Rauschecker and his colleagues, however, thought something else might be going on. Perhaps the damage they saw in this area associated with the limbic system wasn’t a consequence of tinnitus, but part of its cause. “What we wondered,” says Dr. Rauschecker, “was what if these brain structures were part of a noise suppression system that in tinnitus had somehow gone wrong?”

Most researchers agree that tinnitus begins as a result of the brain trying to regain the ability to hear the sound frequencies it has lost by turning up the signals of neighboring frequencies. In the model proposed by Dr. Rauschecker and his colleagues, the critical place for determining whether or not these new hyperactive signals—the tinnitus—will eventually be perceived is in a place where the auditory and limbic systems interact.

Sensory information enters both the auditory and the limbic systems through the medial geniculate nucleus (MGN), a small oval mass that protrudes slightly from the underside of the thalamus, a large double-lobed structure buried beneath the cerebral cortex. Before the signal can travel on, however, it travels through another nearby structure called the thalamic reticular nucleus (TRN), which evaluates whether or not it should be passed on. “It works in everyday life,” says Dr. Rauschecker. “We have a lot of unwanted noises that we don’t want to pay attention to and that we want to filter out.” If it decides it’s an unwanted signal, the TRN feeds back the information to the MGN and the signal goes no further. It will not travel on to the auditory cortex.

This is how, in a healthy limbic system, a tinnitus signal is stopped in its tracks. The question remains, then, what is happening in people who end up hearing the tinnitus signal? Dr. Rauschecker and his researchers think there is a clue in the loss of volume in the mPFCs of the people with tinnitus. This is a structure that projects into and activates the TRN. If the volume loss can be interpreted as a loss of neurons, then the mPFC won’t be doing its job effectively and neither will the TRN. This means it will be much less successful at suppressing unwanted signals and people will begin to hear ringing in their ears.

The ARRA funds supported additional imaging research that revealed hyperactivity in another limbic structure—the nucleus accumbens—that appears to be trying to make up for the loss of activity in other parts of the limbic system. It is one more piece of evidence to support the model that Dr. Rauschecker and his colleagues propose.

Although these findings still aren’t able to definitively tell us how and why tinnitus happens to some people rather than others, they do give researchers a new set of places to explore where the tinnitus signal is processed in the brain and could potentially be stopped. Some people with hearing loss might develop tinnitus because of genetic variations in neurotransmitters that activate the limbic system, such as serotonin, which make them more vulnerable. The findings might also explain why the incidence of depression in people with tinnitus is more than twice the national average: the two conditions stem from malfunctions in the same areas of the brain. If so, commonly used anti-depressants that increase serotonin activity in limbic areas might be one way to ramp up the action in the centers that control the gating system and treat the accompanying depression as well.

“This is a great example of how ARRA funds have been used to accelerate research in an area that could provide great benefit to people who suffer from tinnitus,” says Roger Miller, Ph.D., a program director at the NIDCD. “It’s exactly how we were meant to use ARRA money for the public good.”