What is vocal fold paralysis? 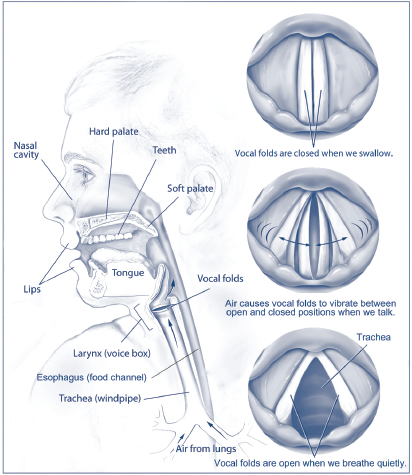 The vocal folds are two elastic bands of muscle tissue located in the larynx (voice box) directly above the trachea (windpipe) (see figure). When you breathe, your vocal folds remain apart and when you swallow, they are tightly closed. When you use your voice, however, air from the lungs causes your vocal folds to vibrate between open and closed positions.

If you have vocal fold paralysis, the paralyzed fold or folds may remain open, leaving the air passages and lungs unprotected. You could have difficulty swallowing or food or liquids could accidentally enter the trachea and lungs, causing serious health problems.

Vocal fold paralysis may be caused by injury to the head, neck, or chest; lung or thyroid cancer; tumors of the skull base, neck, or chest; or infection (for example, Lyme disease). People with certain neurologic conditions such as multiple sclerosis or Parkinson's disease, or who have sustained a stroke, may experience vocal fold paralysis. In many cases, however, the cause is unknown.

What are the symptoms?

Symptoms of vocal fold paralysis include changes in the voice, such as hoarseness or a breathy voice; difficulties with breathing, such as shortness of breath or noisy breathing; and swallowing problems, such as choking or coughing when you eat because food is accidentally entering the windpipe instead of the esophagus (the muscular tube that connects the throat to the stomach). Changes in voice quality, such as loss of volume or pitch, also may occur. Damage to both vocal folds, although rare, usually causes serious problems with breathing.

How is vocal fold paralysis diagnosed?

Vocal fold paralysis is usually diagnosed by an otolaryngologist—a doctor who specializes in ear, nose, and throat disorders. He or she will ask you about your symptoms and when the problems began in order to help determine their cause. The otolaryngologist will also listen to your voice to identify breathiness or hoarseness. Using an endoscope—a tube with a light at the end—your doctor will look directly into the throat at the vocal folds. Some doctors also use a procedure called laryngeal electromyography, which measures the electrical impulses of the nerves in the larynx, to better understand the areas of paralysis.

How is vocal fold paralysis treated?

The most common treatments for vocal fold paralysis are voice therapy and surgery. Some people's voices will naturally recover sometime during the first year after diagnosis, which is why doctors often delay surgery for at least a year. During this time, your doctor will likely refer you to a speech-language pathologist for voice therapy, which may involve exercises to strengthen the vocal folds or improve breath control while speaking. You might also learn how to use your voice differently, for example, by speaking more slowly or opening your mouth wider when you speak. Several surgical procedures are available, depending on whether one or both of your vocal folds are paralyzed. The most common procedures change the position of the vocal fold. These may involve inserting a structural implant or stitches to reposition the laryngeal cartilage and bring the vocal folds closer together. These procedures usually result in a stronger voice. Surgery is followed by additional voice therapy to help fine-tune the voice.

When both vocal folds are paralyzed, a tracheotomy may be required to help breathing. In a tracheotomy, an incision is made in the front of the neck and a breathing tube is inserted through an opening, called a stoma, into the trachea. Rather than occurring through the nose and mouth, breathing now happens through the tube. Following surgery, therapy with a speech-language pathologist helps you learn how to use the voice and how to properly care for the breathing tube.

What research is being done on vocal fold paralysis?

The National Institute on Deafness and Other Communication Disorders (NIDCD) supports research studies that explore the causes of vocal fold paralysis as well as better ways to treat the disorder. One surgical procedure, called medialization laryngoplasty, inserts a structural implant into the larynx to return voice quality. However, close to a quarter of the people who receive this treatment must return for repositioning surgery to fine-tune the placement of the implant. An NIDCD-supported researcher currently is developing a pre-operative planning system that uses 3-D computer modeling to determine the best location for, and configuration of, the implant. The surgery also uses an image-guided system that allows the surgeon to visualize the precise location of the vocal fold to ensure exact placement of the implant. Researchers hope this new system will reduce the need for repeated surgeries and lower the cost and risk of surgical complications from the procedure.

The NIDCD also has been supporting a decades-long project to develop an electrical stimulation technology to help people avoid having a tracheotomy when both vocal folds are paralyzed. The device, which currently is being tested in animals and people, uses an implanted pacemaker to stimulate laryngeal nerves. This returns mobility to the vocal folds so that they can open to allow breathing and close to allow speaking and swallowing.

Where can I get help?

If you notice any unexplained voice changes or discomfort, you should consult an otolaryngologist or a speech-language pathologist for evaluation and possible treatment.

Where can I get additional information?

The NIDCD maintains a directory of organizations that provide information on the normal and disordered processes of hearing, balance, taste, smell, voice, speech, and language. Please see the list of organizations at www.nidcd.nih.gov/directory.

Use the following keywords to help you search for organizations that can answer questions and provide printed or electronic information on vocal fold paralysis: