Aphasia is a disorder that results from damage to portions of the brain that are responsible for language. For most people, these areas are on the left side of the brain. Aphasia usually occurs suddenly, often following a stroke or head injury, but it may also develop slowly, as the result of a brain tumor or a progressive neurological disease. The disorder impairs the expression and understanding of language as well as reading and writing. Aphasia may co-occur with speech disorders, such as dysarthria or apraxia of speech, which also result from brain damage.

Who can acquire aphasia?

Most people who have aphasia are middle-aged or older, but anyone can acquire it, including young children. About 1 million people in the United States currently have aphasia, and nearly 180,000 Americans acquire it each year, according to the National Aphasia Association.

Aphasia is caused by damage to one or more of the language areas of the brain. Most often, the cause of the brain injury is a stroke. A stroke occurs when a blood clot or a leaking or burst vessel cuts off blood flow to part of the brain. Brain cells die when they do not receive their normal supply of blood, which carries oxygen and important nutrients. Other causes of brain injury are severe blows to the head, brain tumors, gunshot wounds, brain infections, and progressive neurological disorders, such as Alzheimer's disease. 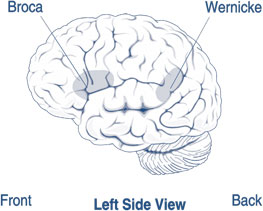 Areas of the brain affected by Broca's and Wernicke's aphasia

What types of aphasia are there?

There are two broad categories of aphasia: fluent and nonfluent, and there are several types within these groups.

Damage to the temporal lobe of the brain may result in Wernicke's aphasia (see figure), the most common type of fluent aphasia. People with Wernicke's aphasia may speak in long, complete sentences that have no meaning, adding unnecessary words and even creating made-up words.

For example, someone with Wernicke's aphasia may say, "You know that smoodle pinkered and that I want to get him round and take care of him like you want before."

As a result, it is often difficult to follow what the person is trying to say. People with Wernicke's aphasia are often unaware of their spoken mistakes. Another hallmark of this type of aphasia is difficulty understanding speech.

The most common type of nonfluent aphasia is Broca's aphasia (see figure). People with Broca's aphasia have damage that primarily affects the frontal lobe of the brain. They often have right-sided weakness or paralysis of the arm and leg because the frontal lobe is also important for motor movements. People with Broca's aphasia may understand speech and know what they want to say, but they frequently speak in short phrases that are produced with great effort. They often omit small words, such as "is," "and" and "the."

For example, a person with Broca's aphasia may say, "Walk dog," meaning, "I will take the dog for a walk," or "book book two table," for "There are two books on the table." People with Broca's aphasia typically understand the speech of others fairly well. Because of this, they are often aware of their difficulties and can become easily frustrated.

Another type of aphasia, global aphasia, results from damage to extensive portions of the language areas of the brain. Individuals with global aphasia have severe communication difficulties and may be extremely limited in their ability to speak or comprehend language. They may be unable to say even a few words or may repeat the same words or phrases over and over again. They may have trouble understanding even simple words and sentences.

There are other types of aphasia, each of which results from damage to different language areas in the brain. Some people may have difficulty repeating words and sentences even though they understand them and can speak fluently (conduction aphasia). Others may have difficulty naming objects even though they know what the object is and what it may be used for (anomic aphasia).

Sometimes, blood flow to the brain is temporarily interrupted and quickly restored. When this type of injury occurs, which is called a transient ischemic attack, language abilities may return in a few hours or days.

How is aphasia diagnosed?

Aphasia is usually first recognized by the physician who treats the person for his or her brain injury. Most individuals will undergo a magnetic resonance imaging (MRI) or computed tomography (CT) scan to confirm the presence of a brain injury and to identify its precise location. The physician also typically tests the person's ability to understand and produce language, such as following commands, answering questions, naming objects, and carrying on a conversation.

If the physician suspects aphasia, the patient is usually referred to a speech-language pathologist, who performs a comprehensive examination of the person's communication abilities. The person's ability to speak, express ideas, converse socially, understand language, and read and write are all assessed in detail.

How is aphasia treated?

Following a brain injury, tremendous changes occur in the brain, which help it to recover. As a result, people with aphasia often see dramatic improvements in their language and communication abilities in the first few months, even without treatment. But in many cases, some aphasia remains following this initial recovery period. In these instances, speech-language therapy is used to help patients regain their ability to communicate.

Research has shown that language and communication abilities can continue to improve for many years and are sometimes accompanied by new activity in brain tissue near the damaged area. Some of the factors that may influence the amount of improvement include the cause of the brain injury, the area of the brain that was damaged and its extent, and the age and health of the individual.

Aphasia therapy aims to improve a person's ability to communicate by helping him or her to use remaining language abilities, restore language abilities as much as possible, and learn other ways of communicating, such as gestures, pictures, or use of electronic devices. Individual therapy focuses on the specific needs of the person, while group therapy offers the opportunity to use new communication skills in a small-group setting.

Recent technologies have provided new tools for people with aphasia. "Virtual" speech pathologists provide patients with the flexibility and convenience of getting therapy in their homes through a computer. The use of speech-generating applications on mobile devices like tablets can also provide an alternative way to communicate for people who have difficulty using spoken language.

Increasingly, patients with aphasia participate in activities, such as book clubs, technology groups, and art and drama clubs. Such experiences help patients regain their confidence and social self-esteem, in addition to improving their communication skills. Stroke clubs, regional support groups formed by people who have had a stroke, are available in most major cities. These clubs can help a person and his or her family adjust to the life changes that accompany stroke and aphasia.

Family involvement is often a crucial component of aphasia treatment because it enables family members to learn the best way to communicate with their loved one.

Family members are encouraged to:

What research is being done for aphasia?

Researchers are testing new types of speech-language therapy in people with both recent and chronic aphasia to see if new methods can better help them recover word retrieval, grammar, prosody (tone), and other aspects of speech.

Some of these new methods involve improving cognitive abilities that support the processing of language, such as short-term memory and attention. Others involve activities that stimulate the mental representations of sounds, words, and sentences, making them easier to access and retrieve.

Researchers are also exploring drug therapy as an experimental approach to treating aphasia. Some studies are testing whether drugs that affect the chemical neurotransmitters in the brain can be used in combination with speech-language therapy to improve recovery of various language functions.

Other research is focused on using advanced imaging methods, such as functional magnetic resonance imaging (fMRI), to explore how language is processed in the normal and damaged brain and to understand recovery processes. This type of research may advance our knowledge of how the areas involved in speech and understanding language reorganize after a brain injury. The results could have implications for the diagnosis and treatment of aphasia and other neurological disorders.

Researchers originally used these techniques to help them understand the parts of the brain that played a role in language and recovery after a stroke. Recently, scientists are studying if this temporary alteration of brain activity might help people re-learn language use. Several clinical trials funded by the National Institute on Deafness and Other Communication Disorders (NIDCD) are currently testing these technologies.

NIDCD-funded clinical trials are also testing other treatments for aphasia. A list of active NIDCD-funded aphasia trials can be found at ClinicalTrials.gov.

Where can I find additional information about aphasia?

Use the following keywords to help you find organizations that can answer questions and provide information on aphasia: