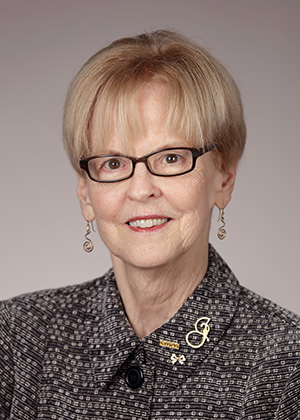 Judith A. Cooper, Ph.D., is deputy director of the National Institute on Deafness and Other Communication Disorders (NIDCD) and director of the NIDCD Division of Scientific Programs. She served as NIDCD acting director from June 2018 to August 2019. Dr. Cooper has advanced the mission of the NIDCD since the institute was established in 1988.

She joined the National Institutes of Health in 1982 as a health science administrator (HSA) within the National Institute of Neurological and Communicative Disorders and Stroke (now known as the National Institute of Neurological Disorders and Stroke). Dr. Cooper joined the NIDCD as an HSA soon after the institute was established. She subsequently served as deputy director as well as acting director of the Division of Human Communication; she was then named chief of the Scientific Programs Branch. In 2003, she became director, Division of Scientific Programs. Since 2004, she has also served as deputy director of the NIDCD. Throughout her time at the NIDCD, she has overseen the extramural research portfolio in the areas of language, language impairments, and language in deaf individuals.

Dr. Cooper has been a dynamic leader of many NIH initiatives. She has played a vital role in trans-NIH autism activities; in particular, she established and led the 2010-2011 trans-NIH working group on minimally verbal children with autism. She also co-chaired the Women’s Health Seminar Series from 1991 to 2012, and she established and chaired the NIH Language Research Symposium Series, coordinating four major NIH symposia from 2000 to 2002. She has demonstrated a strong commitment to encouraging early stage investigators and building a diverse national research workforce in communication disorders. Throughout her career, Dr. Cooper has mentored and encouraged potential and funded researchers, both individually and through presentations at national conferences and workshops.

A native of Shreveport, Louisiana, Dr. Cooper completed her undergraduate education at Southern Methodist University in Dallas, earning a Bachelor of Fine Arts degree in 1971. She received an M.S. in speech-language pathology at Vanderbilt University in 1972, and worked as a speech-language pathologist in Nashville until 1978. Dr. Cooper earned a doctorate in speech and hearing sciences from the University of Washington in Seattle in 1982.

She has received the Distinguished Alumnus award from Vanderbilt University, a Secretary’s (Department of Health and Human Services) Award for Distinguished Service, and numerous NIH Director’s awards. Dr. Cooper was elected a fellow of the American Speech-Language-Hearing Association (ASHA) in 2006 and received ASHA’s Honors of the Association award, its highest honor, in 2007.