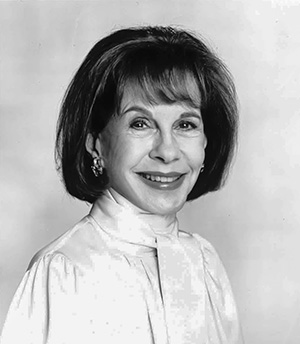 Geraldine Dietz Fox, patient advocate, was instrumental in the establishment of the NIDCD.

Interviewer: Many individuals and organizations worked together to establish the National Institute on Deafness and Other Communication Disorders, or NIDCD, in 1988. Here is the story of Geraldine Dietz Fox, a patient advocate who went to Washington, D.C., to advocate for increased research on hearing loss. Her efforts resulted in the establishment of a new NIH institute on deafness and other communication disorders. Welcome, Mrs. Fox. Would you please tell us about your younger years as a teacher and how you lost your hearing?

Geraldine Dietz Fox: I started teaching school at a preschool. One time a precious little boy…he came down with the mumps, but I didn’t know that. He was on my lap. I was hugging and kissing him. The next week, I knew he had mumps, and then whatever the timeframe was, two or three weeks later, I had the mumps. And now I’m in bed, and the phone rings. So I picked up the phone, and nobody was there, so I hung up. Then the phone rang again, again nobody was there, and I accidentally dropped the phone and I picked it up with my other hand. Now I could hear, and so I went…I went from hand to hand, thinking, “What happened here? What happened to my ear that I can’t hear?”

Interviewer: Wow. Where did you go for help with your hearing loss?

Geraldine Dietz Fox: Then I went to Johns Hopkins, and with John Bordley, who was head of the otolaryngology department. And under his watch, there were some wonderful young men studying to be otolaryngologists, one of which was Bob Ruben, one of which was Jim Snow, who later became head of the NIDCD. What did they tell me? Like all other doctors that I had gone to, that was it. I had lost my hearing; they were sorry; there was no cure for it. And so I had to accept that, really.

Interviewer: What did you do then?

Geraldine Dietz Fox: And then one day in the mail, I got a flyer from some place called the Deafness Research Foundation, saying that they collected ear bones for an ear bank, which I think at that time was up at Harvard. They were raising funds for research. “Research? There’s a place raising funds for research?” So I picked up the phone and I said, “Well, I just got your flyer.” And I said, “You’re not making enough money to cure my hearing loss. I am involved at the Pennsylvania Academy of Fine Arts, and I help them raise funds for their students and their artworks. And I would like you to do X, Y, and Z. I want to tell you about other ways to raise money so that we can make it for research.” Before you knew it, don’t ever ask people who want to make money for you, you ask them to be on the board. They put me on the board. So from there I said to them, “I’d like to go to Washington to see if we could raise money from the government,” because somehow I learned that the government was the largest funder of deafness research. “What are we sitting here for, raising money from people, just people-people? There may be more money to raise in Washington.”

Interviewer: It’s fantastic how you were able to translate your own experience into a larger effort to raise awareness on hearing loss and to advocate for increased funding for research.

Geraldine Dietz Fox: Well, because I had been hearing-impaired for a long time, but with that, remember, right after…really right after I got married, like four years. And I never told anybody I was hearing impaired. And when you’re hearing impaired, if somebody laughs at a joke, you haven’t heard it, but you see them laughing, so you laugh. And this is…we…it’s really a crazy thing. Everybody’s okay with people wearing glasses, but they’re not okay with people having a hearing loss. It’s kind of…it’s just verboten. I don’t know how to say it. Supposedly, it makes you look old. So people really don’t reveal that they have a hearing loss.

Interviewer: I see. Can you please describe how you informed members of Congress about the impact of hearing loss?

Geraldine Dietz Fox: I would go in, and I would take papers with facts on them, numbers, how many people were hearing impaired in the United States, how many people needed hearing aids and didn’t wear them. And I would just go in from door-to-door in Congress. I was a person that wanted to be cured, and I thought the way was through more money for research in Washington. I hadn’t thought yet about an institute. I’m still on my research and raising money.

Interviewer: Can you tell us how Congressman Claude Pepper decided to support the establishment of the NIDCD?

Geraldine Dietz Fox: I called his office, and of course the secretary said, “What do you want to see him about?” I said, “Well, I had a meeting with him, and he said I could come and see him again, and I wanted to talk to him about getting a separate ear institute.” That’s the way I phrased it, separate ear institute. And she said, “Just a minute,” and with that she left the phone. And I said, “Well, I’ll never get an appointment now,” you know. So, she came back and she said, you know, she gave me a date and told me to come back, and I thought, “Wow.” So now I walked into his office on the appointed date. He was sitting at the desk. I walked in maybe from the left. Two people were standing on the right; Peter Reinecke, who was then his research assistant, and Kathy Gardner, who was his chief of staff. I walked in, and he turned to them; he said, “This is Mrs. Fox, she wants a separate ear institute, and if we can help her get it, we’re going to get it for her.” And with that, I’m like in shock, and he dismisses everybody. And now I don’t know, “Oh my heavens! Where do I start here?”

Interviewer: Who else did you meet?

Geraldine Dietz Fox: [William] Natcher, he was the chair of the House Appropriations Subcommittee, Labor, Health and Human Services, and Education. And Silvio Conte was the ranking minority member. Now that was where we would go in and, you know, it was really the first step. Natcher and Silvio Conte being chair and ranking minority of this committee, [Thomas] Harkin had the same position on the other side. They had to have a Democrat and Republican. Natcher was chair of the House, and Harkin was chair of the Senate, of that committee, which was the Senate Appropriations Subcommittee, Labor, HHS, Education, and Related Agencies. Because that’s who we testified before. I do have to mention that Tom Harkin and Arlen Specter worked so well together. You know, it was a joy to see Democrats and Republicans working as well as they did.

Interviewer: So you walked the halls of Congress to get members to support establishing a new NIH institute?

Interviewer: Now, when did the bill to create the NIDCD eventually get passed?

Geraldine Dietz Fox: On October 22nd, and it was in the final ten days of the 100th Congress, that 238 bills were passed, one of which was the bill to create NIDCD. So that was just six days later; Reagan at his ranch, the California White House, signed the bill to create the 13th institute. Now that was done in two and a half years, which was phenomenal really.

Interviewer: You helped establish a new research institute at NIH!

Geraldine Dietz Fox: I feel proud of all the research that’s being done, because it’s experimental and, again, if it works, it’s beneficial to so many people. I was interested in regeneration of hair cells. That was my big thing. And yet, so many things have come along. Genetics have moved in there, and there are just so many areas that are important. People always say, “What has been accomplished the most?” Of course, it’s cochlear implants, which is delightful. Research is prime. Research takes money. There’s no getting around it. And if you’re passionate about curing something for a loved one or for yourself, then you’ve got to get involved. You can’t just wait for somebody else to do it.

Interviewer: Thank you, Mrs. Fox, for sharing your remembrances with us.

Listen to an interview with Robert J. Ruben

Read about the history of the NIDCD: