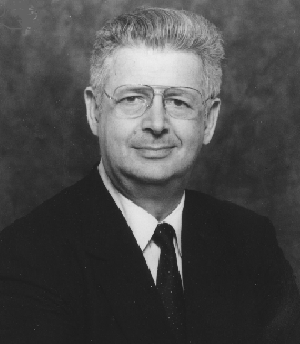 Interviewer: Many individuals and organizations worked together to establish the National Institute on Deafness and Other Communication Disorders, or NIDCD, in 1988. Here is the story of Dr. Robert J. Ruben, a clinician-scientist who championed the establishment of the new NIH institute dedicated to research in deafness and other communication disorders. He convened an international group of scientists which developed the basis for the need for a new NIH institute. He also gained the endorsement of professional societies to support the establishment of the NIDCD. Welcome, Dr. Ruben. Can you please tell us what it was like when you started medical school at Johns Hopkins?

Robert J. Ruben: I wound up in neurosurgery with Earl Walker, and some of my first publications in Journal of Neurophysiology was looking at temporal lobe epilepsy and how that went through. I built a machine to measure Parkinsonian rigidity, and I was just happy as a clam. I was going to go into neurosurgery. Then one day, I get a call from John Bordley, he’s the chairman of the division of laryngology and otology … I walk into his office, “I’m a third-year medical student.” “Well, Mr. Ruben”—"yes sir”—"we have an NIH grant and our principal investigator has decided not to come. From what we can determine, you’re one of—the only person in the whole Hopkins community who knows anything about the physiology of the ear. We would like you to become PI.” Okay, I sleep on this. (Laughter.) So this became a very interesting experience. I’m a fourth-year medical student and a house officer running a lab. I’m getting fellows from all over the world, many who became full professors and departmental chairs while I was still a third-year resident. [Georg von] Békésy was there, and he hadn’t gotten his Nobel by that time. Then, in the lab, we did a lot of things. I started to really get interested in deafness, did a lot of work on genetic mice. But we’re also…the cochlear recordings were the first really objective, reliable way of determining whether an infant was deaf or not, so we were testing lots of kids. I was taking informed consent before it was even popular.

Interviewer: Can you tell us about your research when you were at NIH?

Robert J. Ruben: So I’m down at NIH as the first ear, nose, and throat doctor to be a research associate. Here I did probably the most lasting piece of scientific work, I did the terminal mitosis of all the various cells within the inner ear. That’s still referenced now, almost a half a century later. And it struck me that the way to really understand and perhaps intervene in what’s going on in the inner ear was to be able to take this out of the animal so we could control it. That’s called organ culture. We built a lab, and we did the first organ culture of the mammalian organ of Corti, and every laboratory in the world’s using it. So that’s become another tool.

Interviewer: Where did your research take you from there?

Robert J. Ruben: After about six months or a year, it finally went through my thick head that the major problem was not hearing. It was language. And this then brought me back to what I’d done at Princeton with IQ, and went down the merry road, and I think if one of my…probably two or three of what I consider my best clinical contributions was now bringing language as a fundamental yardstick for both evaluation of a patient and a outcome measure. And that’s another funny story. At the first pediatric conference held in Nottingham, they asked me to keynote it. So I keynoted it. By this time, I had also headed up the FDA thing on cochlear implants in children, and they had set their criteria before anybody had thought of language, so it was just detection: “Does this sound like that?” So forth and so on. I said language had to be the outcome measure.

Interviewer: When did you get the idea that a new NIH institute on deafness and other communication disorders should be established?

Robert J. Ruben: So I get a call on my cellphone: Dave Lim. “Bob, we have this thing called the National Council of Research, and I think we’d like to have you join this.” So they finally brought me on board. Okay, so my job every year was to provide testimony to the House and the Senate. After a while, I realized that what I was interested in, communication disorders, was getting the short end of the stick in appropriations and attention. So I said to myself, “We need a new institute.” And I had to do two things. First, I needed to have scientific justification. What I did was to organize this meeting in June of ’87. And I did this in Denmark, reason why: Most of the people were from abroad. They all came, and we sat for 72 hours in a schoolhouse. And we put together this white paper, which essentially serves as the intellectual background.

Interviewer: That’s great. What was your next step?

Robert J. Ruben: All this was well and good; however, I had no connections with Congress. Somebody comes who I sat in Deafness Research Foundation, Gerry Fox. And here’s a little note to Gerry. Gerry knew that her family had supported Claude Pepper, knew him quite well, and she knew more about that process of lobbying than I did. Then the next thing you know was Tom Harkin, who was the sponsor of the bill, and we worked very hard to get it through. Tom Harkin, whose brother is deaf, became our supporter.

Interviewer: I understand you also worked with Peter Reinecke. What was his role?

Robert J. Ruben: Peter Reinecke was originally Pepper’s aide, then he was Tom’s. Peter essentially wrote…we gave him what to go into the legislation. I’m not a lawyer, so Peter put that into “Congressese,” so to say. And he’s smart, and he knew what words to put in and what words not to put in.

Interviewer: Why was creating the NIDCD necessary?

Robert J. Ruben: That’s easy: Focus. Neurology institute covered too much. I broke away. You have a whole institute which is now focused. If this was still a neurology institute, you wouldn’t have newborn infant screening. You’d certainly have very little language. We’ve also picked up taste and smell, which is there. You wouldn’t have people concentrated on that; very, very simple. And I think history has proven me right.

Interviewer: And so you stayed involved with the NIDCD after it was established. What did you do?

Robert J. Ruben: I was on their senior advisory council until the term limited me out. Then I served on many of their review panels.

Interviewer: What was the impact on the scientific community after the NIDCD was established?

Robert J. Ruben: When I first started this, I guess in 1958, you had some very poor hearing aids, you had ear trumpets, and you just had a little habilitation for voice problems, almost nothing for speech, certainly nothing for language. Today, you have modestly sophisticated hearing aids. You have cochlear implant, you have a lot of things that can be done for voice.

Interviewer: What are some other notable research accomplishments of the NIDCD?

Robert J. Ruben: One of the most important things that NIH has done has been the newborn infant screening, to help that along. The second thing that it has facilitated is all the genetics. It’s a leader amongst other leaders.

Interviewer: Tell us about Dr. James F. Battey. I understand he was scientific director of the NIDCD starting in 1995 and then institute director in 1998 until his retirement in 2018.

Robert J. Ruben: He brought the institute into the 21st century. He was a very good listener, he interacted well with people, and all the genetics programs were started with him. A lot of the cell biology was started with him. He certainly encouraged things in language, he encouraged things in speech and voice, so he turned out to be a rather good, outgoing leader to steer the thing as best you could. He has accolades. I’m sorry to see him go.

Interviewer: Looking into the future, what are your hopes for the NIDCD?

Robert J. Ruben: I would put as much emphasis as I can into finding ways of prevention and fundamentally looking at the biology of language. Thirdly, allowing basic science, that is, just pursuing science for science’s sake.

Interviewer: Thank you for taking the time to share this history and your thoughts with us, Dr. Ruben.

Listen to an interview with Geraldine Dietz Fox

Read about the history of the NIDCD: