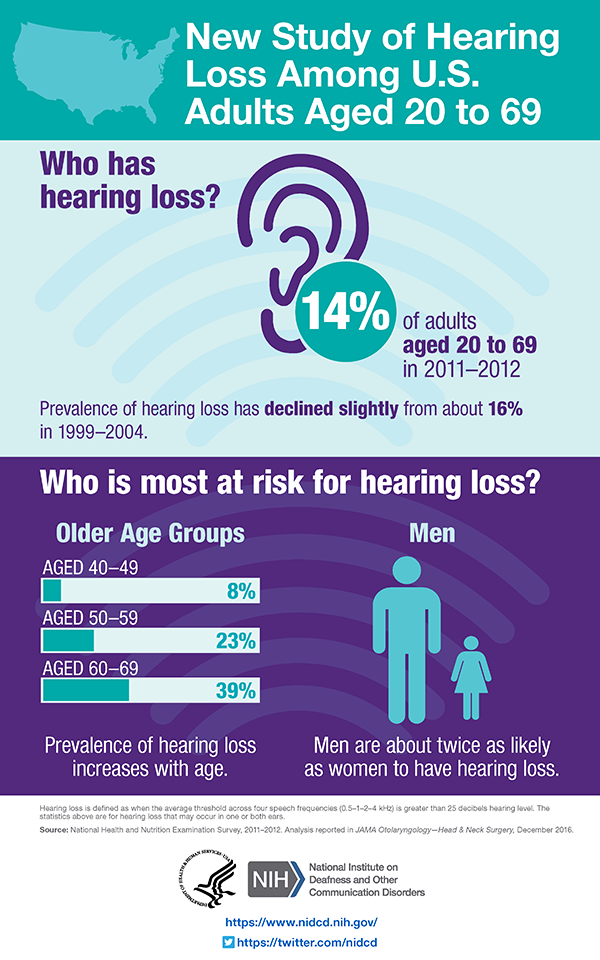 Hearing loss among U.S. adults aged 20 to 69 has declined over the last decade, even as the population of older Americans continues to grow. These findings, published today in JAMA Otolaryngology–Head & Neck Surgery, also confirm that hearing loss is strongly associated with age and other demographic factors such as sex, race/ethnicity, and education. Noise exposure, which is potentially preventable, was also significant but less strongly associated after adjustment for other factors. The research was supported by the National Institute on Deafness and Other Communication Disorders (NIDCD), part of the National Institutes of Health (NIH), and the National Institute for Occupational Safety and Health (NIOSH), part of the Centers for Disease Control and Prevention (CDC).

To examine hearing loss trends over time in adults aged 20 to 69, researchers compared hearing health data collected as part of the National Health and Nutrition Examination Survey (NHANES) over two time periods: 2011–2012 and 1999–2004. NHANES is a nationally representative health interview and examination survey of U.S. adults. NHANES participants listened to tones of various frequencies that were presented at different loudness levels. The researchers defined hearing loss as an average hearing threshold in at least one ear that was greater than 25 decibels in loudness (about as loud as rustling leaves). Data were also age- and sex-adjusted to reduce the effects of demographic differences across the two time periods.

The researchers found that the overall annual prevalence of hearing loss dropped slightly, from 16 percent to 14 percent, or 28 million adults in the 1999–2004 period versus 27.7 million in the 2011–2012 period. This decline in absolute numbers was observed despite an increase in the population generally, and in the relative number of adults aged 50 to 69 in the more recent time period. The new results are consistent with previous findings showing improvements in hearing over time, when researchers compared NHANES data from 1999 to 2004 with data from 1959 to 1962.

“Our findings show a promising trend of better hearing among adults that spans more than half a century,” said Howard J. Hoffman, M.A., first author on the paper and director of the NIDCD’s Epidemiology and Statistics Program. “The decline in hearing loss rates among adults under age 70 suggests that age-related hearing loss may be delayed until later in life. This is good news because for those who do develop hearing loss, they will have experienced more quality years of life with better hearing than earlier generations.”

The researchers do not know the reasons for the decline in hearing loss prevalence, but they speculate that possible factors could include fewer manufacturing jobs, increased use of hearing protectors, less smoking, and advances in health, including better medical care to manage risk factors associated with hearing loss.

The researchers also found that age- and sex-adjusted hearing loss declined over the years for the averaged high frequencies (3–6 kilohertz) in both ears, and for speech frequencies (0.5–4 kilohertz) in one ear. People aged 70 and above, although not studied in this report, have the highest prevalence of hearing loss of any age group, according to the authors.

“Despite the benefits from the apparent delayed start of hearing loss, there will be an increased need for affordable hearing health care as the numbers of adults aged 70 and older continue to grow,” said NIDCD Director James F. Battey, Jr., M.D., Ph.D. “NIDCD continues to prioritize research on hearing health care for adults, including approaches to make treatment more accessible and affordable to improve the quality of life for the millions of Americans with hearing loss.”

About the National Institute on Deafness and Other Communication Disorders (NIDCD): The NIDCD supports and conducts research and research training on the normal and disordered processes of hearing, balance, taste, smell, voice, speech, and language, and provides health information, based upon scientific discovery, to the public.

About the National Institutes of Health (NIH): The NIH, the nation's medical research agency, includes 27 Institutes and Centers and is a component of the U.S. Department of Health and Human Services. NIH is the primary federal agency conducting and supporting basic, clinical, and translational medical research, and is investigating the causes, treatments, and cures for both common and rare diseases.