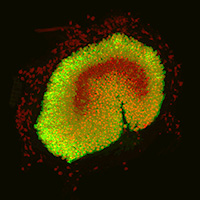 Hair cells (red) and associated supporting cells (green) in the sensory patch of a mouse utricle, part of the balancing apparatus of the inner ear. Credit: Joseph Burns, Ph.D., NIDCD.

Using a sensitive new technology called single-cell RNA-seq on cells from mice, scientists have created the first high-resolution gene expression map of the newborn mouse inner ear. The findings provide new insight into how epithelial cells in the inner ear develop and differentiate into specialized cells that serve critical functions for hearing and maintaining balance. Understanding how these important cells form may provide a foundation for the potential development of cell-based therapies for treating hearing loss and balance disorders. The research was conducted by scientists at the National Institute on Deafness and Other Communication Disorders (NIDCD), part of the National Institutes of Health.

In a companion study led by NIDCD-supported scientists at the University of Maryland School of Medicine and scientists at the Sackler School of Medicine at Tel Aviv University, researchers used a similar technique to identify a family of proteins critical for the development of inner ear cells. Both studies were published online on October 15 in the journal Nature Communications.

"Age-related hearing loss occurs gradually in most of us as we grow older. It is one of the most common conditions among older adults, affecting half of people over age 75," said James F. Battey, Jr., M.D., Ph.D., director of the NIDCD. "These new findings may lead to new regenerative treatments for this critical public health issue."

Specialized sensory epithelial cells in the inner ear include hair cells and supporting cells, which provide the hair cells with crucial structural and functional support. Hair cells and supporting cells located in the cochlea—the snail-shaped structure in the inner ear—work together to detect sound, thus enabling us to hear. In contrast, hair cells and supporting cells in the utricle, a fluid-filled pouch near the cochlea, play a critical role in helping us maintain our balance. These cells detect how we move our heads and how our heads are positioned; this information tells our brain, for example, whether we are standing or lying down. The utricle is one of several structures and organs in the body that provide our sense of balance; together, they comprise the vestibular system.

Hair cells and supporting cells can be damaged by medications, infections or disease, injury, or aging, leading to hearing loss and balance problems. In humans, these cells cannot naturally repair themselves, so effective treatments are limited.

In addition, there are only a few thousand of these sensory cells; they are tucked deep in a bony channel, making them difficult to study.

To gain a better understanding of inner ear cell development, Matthew Kelley, Ph.D., chief of the Section on Developmental Neuroscience at the NIDCD, and his research team used single-cell RNA-seq, a new technology that can extract comprehensive gene activity data from just one cell. Other methods for obtaining this type of data typically require thousands of cells. Knowing which genes are active can tell scientists a lot about a cell's individual characteristics and function.

Kelley's team analyzed 301 cells—some hair cells and some supporting cells—taken from the cochlea and utricle of newborn mice. By comparing the cells' gene activity profiles, the researchers found unique patterns in hair cells and supporting cells. They also uncovered evidence for subgroups of cells within each of these classes. While little is known about these subgroups, the researchers speculate that the cells' distinct gene activity patterns may reflect specialized functions.

The data also allowed the scientists to identify distinct developmental patterns of gene activity. Cells in the vestibular part of the inner ear develop at somewhat different rates, so each cell was at a slightly different point in its maturity when the researchers examined it. By analyzing the cells' gene activity profiles, the scientists were able to identify genes that are active at each stage of development, bringing to light important clues about how the specialized hair cells are formed.

"Using this single-cell profiling technique provides a new option to identify the genetic activity of cells, particularly in systems with limited numbers of cells, like the inner ear," said Kelley, senior author of the study. "Identifying the gene expression maps for the development of inner ear cells is essential to understanding how they form, and may help us create ways to regenerate these cells."

In the second study, researchers also took advantage of RNA-seq technology. Researchers used a computational-experimental approach to search for common regulatory regions in the genes expressed in the hair cells. The scientists found that a group of gene regulators called Regulatory Factor Xs (RFX) helps to drive genes that are preferentially active in hair cells.

The researchers also showed that RFX genes have an essential role in hearing. Mice lacking two RFX proteins began to lose their hair cells and their hearing about two weeks after birth. After three months, these mice were completely deaf. The researchers concluded that the RFX gene regulators, while not crucial early in the development of hair cells, are necessary for the cells' maturation and long-term survival.

The NIDCD supports and conducts research and research training on the normal and disordered processes of hearing, balance, taste, smell, voice, speech, and language and provides health information, based upon scientific discovery, to the public. For more information about NIDCD programs, our website.

About the National Institutes of Health (NIH): NIH, the nation's medical research agency, includes 27 Institutes and Centers and is a component of the U.S. Department of Health and Human Services. NIH is the primary federal agency conducting and supporting basic, clinical, and translational medical research, and is investigating the causes, treatments, and cures for both common and rare diseases.