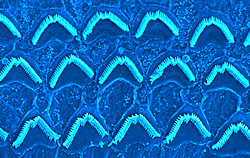 A gene associated with both noise-induced and age-related hearing loss has been identified by an international team of researchers funded by the National Institute on Deafness and Other Communication Disorders (NIDCD). The gene, P2X2, is the first gene to be identified in humans and a mouse model that is associated with both types of hearing loss. It appears to be crucial for life-long normal hearing and for protection from exposure to noise. The findings are published in the January 24, 2013 online issue of Proceedings of the National Academy of Sciences (PNAS).

The gene is associated with DFNA41, a form of progressive hearing loss. People with DFNA41 begin to lose their hearing in both ears roughly between the ages of 12 and 20, depending on their exposure to noise. The hearing loss is also usually accompanied by high frequency tinnitus (high-pitched ringing in the ears). Over the course of several decades, hearing loss will range from mild to severe.

The NIDCD-funded researchers, led by Xue Zhong Liu, M.D., Ph.D., of the University of Miami Miller School of Medicine, discovered that P2X2 mutation found in DFNA41 results in defects in sensory hair cells in the inner ear, which eventually lead to ongoing hearing loss. The study establishes, at the cellular and molecular levels, that the function of this ion channel, previously known to be involved in sensory signaling and pain, has a major impact on noise-induced and age-related hearing loss.

"Age-related hearing loss and noise-induced hearing loss are two of the most common morbidities in the world, affecting more than 500 million people," says Dr. Liu, "but we don't know as much as we should about the genetics that underlie them." These findings demonstrate the importance of genetic approaches to uncover the underlying mechanisms that contribute to hearing loss, either as a result of age or chronic exposure to noise.

Bechara Kachar, M.D., chief of the NIDCD laboratory of cell structure and dynamics, also contributed to the study.