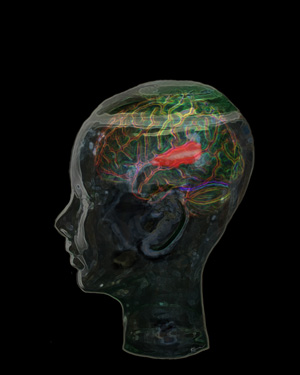 This graphic of a human brain is derived from multiple structural magnetic resonance images. At center is the superior temporal region, which contains the human auditory cortex.
Image credit: Christina Karns

People who are born deaf process the sense of touch differently than people who are born with normal hearing, according to research funded by the National Institutes of Health.  The finding reveals how the early loss of a sense— in this case hearing—affects brain development. It adds to a growing list of discoveries that confirm the impact of experiences and outside influences in molding the developing brain. The study is published in the July 11 online issue of The Journal of Neuroscience.

The researchers, Christina M. Karns, Ph.D., a postdoctoral research associate in the Brain Development Lab at the University of Oregon, Eugene, and her colleagues, show that deaf people use the auditory cortex to process touch stimuli and visual stimuli to a much greater degree than occurs in hearing people.  The finding suggests that since the developing auditory cortex of profoundly deaf people is not exposed to sound stimuli, it adapts and takes on additional sensory processing tasks.

“This research shows how the brain is capable of rewiring in dramatic ways,” said James F. Battey, Jr., M.D., Ph.D., director of the NIDCD. “This will be of great interest to other researchers who are studying multisensory processing in the brain.”

Previous research, including studies performed by the lab director, Helen Neville Ph.D., has shown that people who are born deaf are better at processing peripheral vision and motion. Deaf people may process vision using many different brain regions, especially auditory areas, including the primary auditory cortex. However, no one has tackled whether vision and touch together are processed differently in deaf people, primarily because in experimental settings, it is more difficult to produce the kind of precise tactile stimuli needed to answer this question.

Dr. Karns and her colleagues developed a unique apparatus that could be worn like headphones while subjects were in a magnetic resonance imaging (MRI) scanner. Flexible tubing, connected to a compressor in another room, delivered soundless puffs of air above the right eyebrow and to the cheek below the right eye. Visual stimuli—brief pulses of light—were delivered through fiber optic cables mounted directly below the air-puff nozzle.  Functional MRI was used to measure reactions to the stimuli in Heschl’s gyrus, the site of the primary auditory cortex in the human brain’s temporal lobe as well as other brain areas.

The researchers took advantage of an already known perceptual illusion in hearing people known as the auditory induced double flash, in which a single flash of light paired with two or more brief auditory events is perceived as multiple flashes of light. In their experiment, the researchers used a double puff of air as a tactile stimulus to replace the auditory stimulus, but kept the single flash of light. Subjects were also exposed to tactile stimuli and light stimuli separately and time-periods without stimuli to establish a baseline for brain activity.

Hearing people exposed to two puffs of air and one flash of light claimed only to see a single flash. However, when exposed to the same mix of stimuli, the subjects who were deaf saw two flashes. Looking at the brain scans of those who saw the double flash, the scientists observed much greater activity in Heschl’s gyrus, although not all deaf brains responded to the same degree.  The deaf individuals with the highest levels of activity in the primary auditory cortex in response to touch also had the strongest response to the illusion.

“We designed this study because we thought that touch and vision might have stronger interactions in the auditory cortices of deaf people,” said Dr. Karns." As it turns out, the primary auditory cortex in people who are profoundly deaf focuses on touch, even more than vision, in our experiment.”

There are several ways the finding may help deaf people. For example, if touch and vision interact more in the deaf, touch could be used to help deaf students learn math or reading. The finding also has the potential to help clinicians improve the quality of hearing after cochlear implants, especially among congenitally deaf children who are implanted after the ages of 3 or 4. These children, who have lacked auditory input since birth, may struggle with comprehension and speech because their auditory cortex has taken on  the processing of other senses, such as touch and vision. These changes may  make it more challenging for the auditory cortex to recover auditory processing function after cochlear implantation. Being able to measure how much the auditory cortex has been taken over by other sensory processing could offer doctors insights into the kinds of intervention programs that would help the brain retrain and devote more capacity to auditory processing.

The NIDCD supports and conducts research and research training on the normal and disordered processes of hearing, balance, taste, smell, voice, speech and language and provides health information, based upon scientific discovery, to the public. For more information about NIDCD programs, see the website at www.nidcd.nih.gov.

About the National Institutes of Health (NIH): NIH, the nation's medical research agency, includes 27 Institutes and Centers and is a component of the U.S. Department of Health and Human Services. NIH is the primary federal agency conducting and supporting basic, clinical, and translational medical research, and is investigating the causes, treatments, and cures for both common and rare diseases. For more information about NIH and its programs, visit www.nih.gov.