Global Variation in Sensitivity to Bitter-Tasting Substances (PTC or PROP) 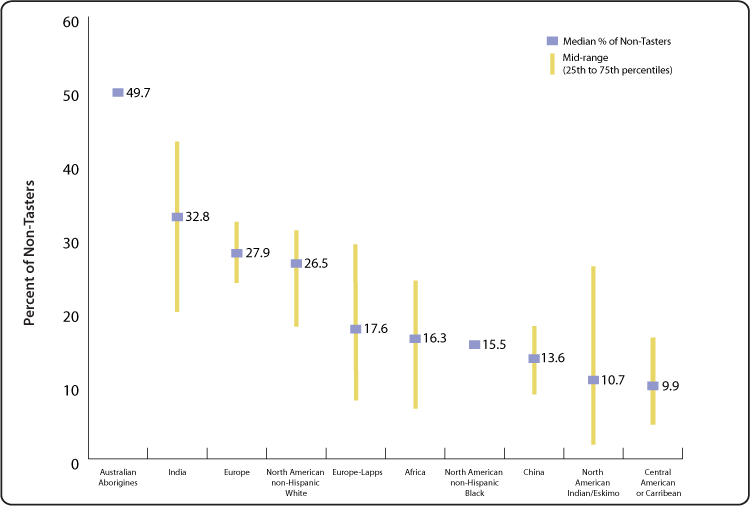 Chart created by the NIDCD Epidemiology and Statistics Program, based on Guo & Reed (2001).

This figure shows that the ability to taste phenylthiocarbamide (PTC) varies significantly from one population to another worldwide. The data plotted in the figure were extracted from a review article (Guo & Reed, 2001) that summarizes findings from tests conducted in more than 370 population samples worldwide, all published between 1934 and 1998.

The horizontal bars represent the median percentage of PTC non-tasters across several studies. The vertical bars indicate variability by illustrating the 25th to 75th percentile range (or mid-range) across studies within each population sampled. For example, among Australian Aborigines, approximately half (50%) are PTC non-tasters, while for people of European origin (including North American, non-Hispanic whites), the percentage of non-tasters averages 27% to 28%. Most African, Asian, and Native American populations have lower percentages of PTC non-tasters, with averages varying between 10% and 16%. Within each population tested to date, there are some people who can and some who can not taste PTC.

Early studies showed that the ability to taste PTC or a related chemical compound, 6-n-propylthiouracil (PROP), was under genetic control and was probably a simple Mendelian trait (Blakeslee, 1931; Fox, 1932; Levit & Soboleva, 1935). Subsequent linkage studies have shown the underlying genetics to be more complex, with multiple alleles on two or more chromosomes (Reed et al., 1999; Drayna, 2005). Why this trait has been maintained in human populations is unknown, but several studies have suggested that this polymorphism may influence food selection, nutritional status, thyroid metabolism, and consumption of bitter tasting beverages such as coffee or alcohol (Bartoshuk et al., 1994; Tepper, 1998; Duffy et al., 2004).