Ambulatory Care Visits with a Diagnosis of Otitis Media 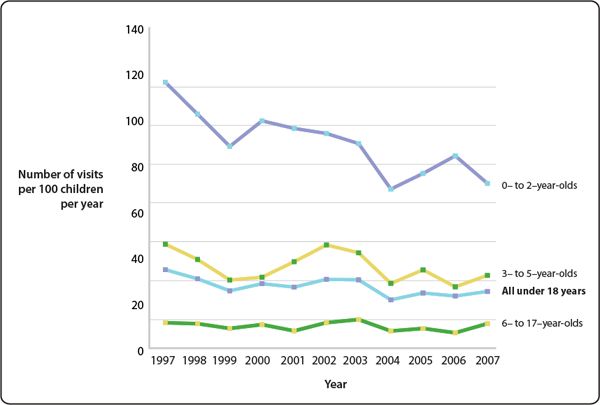 Ambulatory care visits include those made to physician offices, hospital outpatient departments, and emergency departments.

This graph shows data collected annually in the US. National Ambulatory Medical Care Survey (NAMCS) and National Hospital Ambulatory Medical Care Survey (NHAMCS) on the number of office visits with otitis media as the diagnosis for children under the age of 18 years. The overall rate shows a general decline from the baseline rate of 34.47 per 100 children in 1997 to a rate of 24.66 per 100 children in 2007. The steepest decline has occurred for young children under 3 years of age where the prevalence of ear infections (otitis media) is highest. Introduction of the pneumococcal conjugate vaccine, which was licensed for routine infant administration in 2000, may be responsible in part for this decline (Black et al., 2000; Fireman et al., 2003; Black et al., 2006; US. HHS, 2006). A study in the U.S. has shown a decline in otitis media diagnoses in vaccinated children. Comparing otitis media rates in 1994–99 with 2002–03 among children <2 years, a significant 20% decline (246 otitis media visits per 1,000 children per year) was observed (Grijalva et al., 2006).