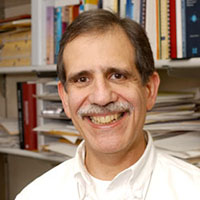 Dr. Horwitz received his B.A. degree from Washington University in St. Louis, and his Ph.D. in physics from the University of Pennsylvania. After several years of teaching physics, he joined the National Institute on Aging as a senior staff fellow in the Laboratory of Neurosciences, headed by Stanley I. Rapoport. Dr. Horwitz's work focused on developing methods for using positron emission tomography and other functional neuroimaging data to determine how different brain regions interact in human subjects.

In 1989, he obtained tenure, and in 1999 he joined the Language Section, NIDCD, as a senior investigator. In 2002, he became chief of the Brain Imaging and Modeling Section of the NIDCD. Until Dr. Horwitz's retirement in 2017, his laboratory studied the neural basis of human cognition, especially auditory and language function, using functional brain imaging and computational neural modeling.