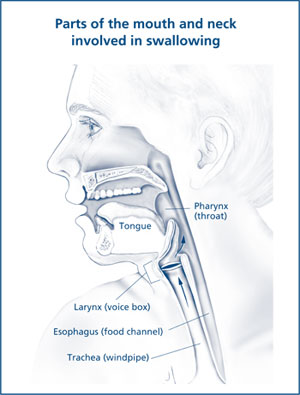 People with dysphagia have difficulty swallowing and may even experience pain while swallowing (odynophagia). Some people may be completely unable to swallow or may have trouble safely swallowing liquids, foods, or saliva. When that happens, eating becomes a challenge. Often, dysphagia makes it difficult to take in enough calories and fluids to nourish the body and can lead to additional serious medical problems.

How do we swallow?

Swallowing is a complex process. Some 50 pairs of muscles and many nerves work to receive food into the mouth, prepare it, and move it from the mouth to the stomach. This happens in three stages. During the first stage, called the oral phase, the tongue collects the food or liquid, making it ready for swallowing. The tongue and jaw move solid food around in the mouth so it can be chewed. Chewing makes solid food the right size and texture to swallow by mixing the food with saliva. Saliva softens and moistens the food to make swallowing easier. Normally, the only solid we swallow without chewing is in the form of a pill or caplet. Everything else that we swallow is in the form of a liquid, a puree, or a chewed solid.

The second stage begins when the tongue pushes the food or liquid to the back of the mouth. This triggers a swallowing response that passes the food through the pharynx, or throat (see figure). During this phase, called the pharyngeal phase, the larynx (voice box) closes tightly and breathing stops to prevent food or liquid from entering the airway and lungs.

The third stage begins when food or liquid enters the esophagus, the tube that carries food and liquid to the stomach. The passage through the esophagus, called the esophageal phase, usually occurs in about three seconds, depending on the texture or consistency of the food, but can take slightly longer in some cases, such as when swallowing a pill.

How does dysphagia occur?

Dysphagia occurs when there is a problem with the neural control or the structures involved in any part of the swallowing process. Weak tongue or cheek muscles may make it hard to move food around in the mouth for chewing. A stroke or other nervous system disorder may make it difficult to start the swallowing response, a stimulus that allows food and liquids to move safely through the throat. Another difficulty can occur when weak throat muscles, such as after cancer surgery, cannot move all of the food toward the stomach. Dysphagia may also result from disorders of the esophagus.

What are some problems caused by dysphagia?

Dysphagia can be serious. Someone who cannot swallow safely may not be able to eat enough of the right foods to stay healthy or maintain an ideal weight.

Food pieces that are too large for swallowing may enter the throat and block the passage of air. In addition, when foods or liquids enter the airway of someone who has dysphagia, coughing or throat clearing sometimes cannot remove it. Food or liquid that stays in the airway may enter the lungs and allow harmful bacteria to grow, resulting in a lung infection called aspiration pneumonia.

Swallowing disorders may also include the development of a pocket outside the esophagus caused by weakness in the esophageal wall. This abnormal pocket traps some food being swallowed. While lying down or sleeping, someone with this problem may draw undigested food into the throat. The esophagus may also be too narrow, causing food to stick. This food may prevent other food or even liquids from entering the stomach.

Dysphagia has many possible causes and happens most frequently in older adults. Any condition that weakens or damages the muscles and nerves used for swallowing may cause dysphagia. For example, people with diseases of the nervous system, such as cerebral palsy or Parkinson’s disease, often have problems swallowing. Additionally, stroke or head injury may weaken or affect the coordination of the swallowing muscles or limit sensation in the mouth and throat.

People born with abnormalities of the swallowing mechanism may not be able to swallow normally. Infants who are born with an opening in the roof of the mouth (cleft palate) are unable to suck properly, which complicates nursing and drinking from a regular baby bottle.

In addition, cancer of the head, neck, or esophagus may cause swallowing problems. Sometimes the treatment for these types of cancers can cause dysphagia. Injuries of the head, neck, and chest may also create swallowing problems. An infection or irritation can cause narrowing of the esophagus. Finally, for people with dementia, memory loss and cognitive decline may make it difficult to chew and swallow.

How is dysphagia treated?

There are different treatments for various types of dysphagia. Medical doctors and speech-language pathologists who evaluate and treat swallowing disorders use a variety of tests that allow them to look at the stages of the swallowing process. One test, the Flexible Endoscopic Evaluation of Swallowing with Sensory Testing (FEESST), uses a lighted fiberoptic tube, or endoscope, to view the mouth and throat while examining how the swallowing mechanism responds to such stimuli as a puff of air, food, or liquids.

A videofluoroscopic swallow study (VFSS) is a test in which a clinician takes a videotaped X-ray of the entire swallowing process by having you consume several foods or liquids along with the mineral barium to improve visibility of the digestive tract. Such images help identify where in the swallowing process you are experiencing problems. Speech-language pathologists use this method to explore what changes can be made to offer a safe strategy when swallowing. The changes may be in food texture, size, head and neck posture, or behavioral maneuvers, such as “chin tuck,” a strategy in which you tuck your chin so that food and other substances do not enter the trachea when swallowing. If you are unable to swallow safely despite rehabilitation strategies, then medical or surgical intervention may be necessary for the short-term as you recover. In progressive conditions such as amyotrophic lateral sclerosis (ALS, or Lou Gehrig’s disease), a feeding tube in the stomach may be necessary for the long-term.

For some people, treatment may involve muscle exercises to strengthen weak facial muscles or to improve coordination. For others, treatment may involve learning to eat in a special way. For example, some people may have to eat with their head turned to one side or looking straight ahead. Preparing food in a certain way or avoiding certain foods may help in some situations. For instance, people who cannot swallow thin liquids may need to add special thickeners to their drinks. Other people may have to avoid hot or cold foods or drinks.

For some, however, consuming enough foods and liquids by mouth may no longer be possible. These individuals must use other methods to nourish their bodies. Usually this involves a feeding system, such as a feeding tube, that bypasses or supplements the part of the swallowing mechanism that is not working normally.

What research is being done on dysphagia?

Scientists are conducting research that will improve the ability of physicians and speech-language pathologists to evaluate and treat swallowing disorders. Every aspect of the swallowing process is being studied in people of all ages, including those who do not have dysphagia, to give researchers a better understanding of how normal and disordered processes compare.

Research has also led to new, safe ways to study tongue and throat movements during the swallowing process. These methods will help physicians and speech-language pathologists safely evaluate a patient’s progress during treatment.

Studies of treatment methods are helping scientists discover why some forms of treatment work with some people and not with others. This knowledge will help some people avoid serious lung infections and help others avoid tube feedings.

Where can I get help?

If you have a sudden or gradual change in your ability to swallow, you should consult with your physician. He or she may refer you to an otolaryngologist—a doctor who specializes in diseases of the ear, nose, throat, head, and neck—and a speech-language pathologist. You may be referred to a neurologist if a stroke or other neurologic disorder is the cause of the swallowing problem.

Where can I find additional information about dysphagia?

Use the following keywords to help you find organizations that can answer questions and provide information on dysphagia: