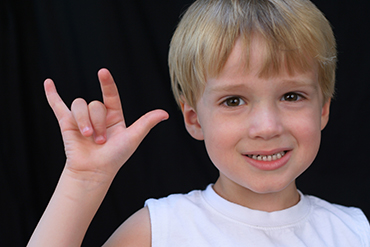 A young boy signs "I love you."

American Sign Language (ASL) is a complete, natural language that has the same linguistic properties as spoken languages, with grammar that differs from English. ASL is expressed by movements of the hands and face. It is the primary language of many North Americans who are deaf and hard of hearing and is used by some hearing people as well.

There is no universal sign language. Different sign languages are used in different countries or regions. For example, British Sign Language (BSL) is a different language from ASL, and Americans who know ASL may not understand BSL. Some countries adopt features of ASL in their sign languages.

Where did ASL originate?

No person or committee invented ASL. The exact beginnings of ASL are not clear, but some suggest that it arose more than 200 years ago from the intermixing of local sign languages and French Sign Language (LSF, or Langue des Signes Française). Today’s ASL includes some elements of LSF plus the original local sign languages; over time, these have melded and changed into a rich, complex, and mature language. Modern ASL and modern LSF are distinct languages. While they still contain some similar signs, they can no longer be understood by each other’s users.

How does ASL compare with spoken language?

ASL is a language completely separate and distinct from English. It contains all the fundamental features of language, with its own rules for pronunciation, word formation, and word order. While every language has ways of signaling different functions, such as asking a question rather than making a statement, languages differ in how this is done. For example, English speakers may ask a question by raising the pitch of their voices and by adjusting word order; ASL users ask a question by raising their eyebrows, widening their eyes, and tilting their bodies forward.

Just as with other languages, specific ways of expressing ideas in ASL vary as much as ASL users themselves. In addition to individual differences in expression, ASL has regional accents and dialects; just as certain English words are spoken differently in different parts of the country, ASL has regional variations in the rhythm of signing, pronunciation, slang, and signs used. Other sociological factors, including age and gender, can affect ASL usage and contribute to its variety, just as with spoken languages.

How do most children learn ASL?

Parents should expose a deaf or hard-of-hearing child to language (spoken or signed) as soon as possible. The earlier a child is exposed to and begins to acquire language, the better that child’s language, cognitive, and social development will become. Research suggests that the first few years of life are the most crucial to a child’s development of language skills, and even the early months of life can be important for establishing successful communication with caregivers. Thanks to screening programs in place at almost all hospitals in the United States and its territories, newborn babies are tested for hearing before they leave the hospital. If a baby has hearing loss, this screening gives parents an opportunity to learn about communication options. Parents can then start their child’s language learning process during this important early stage of development.

What research does the NIDCD support on ASL and other sign languages?

The NIDCD supports research on ASL, including its acquisition and characterization. Funded research includes studies to understand sign language’s grammar, acquisition, and development, and use of sign language when spoken language access is compromised by trauma or degenerative disease, or when speech is difficult to acquire due to early hearing loss or injury to the nervous system. 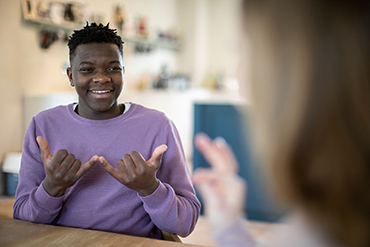 Study of sign language can also help scientists understand the neurobiology of language development. In one study, researchers reported that the building of complex phrases, whether signed or spoken, engaged the same brain areas. Better understanding of the neurobiology of language could provide a translational foundation for treating injury to the language system, for employing signs or gestures in therapy for children or adults, and for diagnosing language impairment in individuals who are deaf.

The NIDCD is also funding research on sign languages created among small communities of people with little to no outside influence. Emerging sign languages can be used to model the essential elements and organization of natural language and to learn about the complex interplay between natural human language abilities, language environment, and language learning outcomes. Visit the NIH Clinical Research Trials and You website to read about these and other clinical trials that are recruiting volunteers.

Where can I find additional information about American Sign Language?