August 12, 2014
Researchers at the NIH have for the first time purified a key part of myosin 15, a molecular motor protein that helps build healthy hearing structures in the inner ear. Mutations in the myosin 15 gene (MYO15A) have been linked to a form of hereditary deafness in humans. Using a novel approach that involved chaperone molecules to express the protein, researchers have revealed the first detailed insight into the molecule’s structure and function, laying the foundation for new treatments for some forms of hearing loss. Jonathan Bird, Ph.D., a postdoctoral fellow in the NIDCD Laboratory of Molecular Genetics, was the lead author. 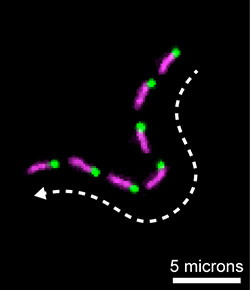 A montage of fluorescence images showing
a single actin filament being propelled along
a microscope slide by the molecular motor,
myosin 15. Multi-color actin filaments were
used to determine the direction of myosin 15
movement. The “barbed-end” of the actin
filament has a green label; the
filament itself is in magenta.

For the first time, researchers at the National Institutes of Health (NIH) have purified a key part of myosin 15, a molecular motor protein that helps build healthy hearing structures in the inner ear. Mutations in the myosin 15 gene (MYO15A) have been linked to a form of hereditary deafness in humans. Using a novel approach to express the protein, researchers have revealed the first detailed insight into the molecule’s structure and function, laying the foundation for new treatments for some forms of hearing loss.

The new approach to expressing myosin 15 may also help the study of other types of myosin motors, such as skeletal and cardiac muscle myosins, which could accelerate development of targeted drug therapies for heart disease and other health conditions.

A collaboration between the NIH’s National Institute on Deafness and Other Communication Disorders (NIDCD) and the National Heart, Lung, and Blood Institute (NHLBI), the study was published online

August 11 in the journal Proceedings of the National Academy of Sciences. Jonathan Bird, Ph.D., a postdoctoral fellow in the NIDCD Laboratory of Molecular Genetics, is the lead author.

About two or three in 1,000 children in the United States are born deaf or hard-of-hearing. More than half of these cases are caused by genetic factors.

The new study builds upon decades of work by NIDCD researchers and others to understand the complex formation and function of stereocilia, the finger-like structures that project from hair cells, the sensory cells in the inner ear that enable us to hear. Stereocilia sense sound waves passing through the inner ear and help to convert them into electrical signals that are transmitted to the brain, where they are “heard.”

Myosin 15 is a molecular motor protein, so called because it can move around within a cell. Scientists believe that myosin 15 helps to build stereocilia by supplying them with components for assembly, much like a delivery truck. But the molecular structure of myosin 15 and how it functions in stereocilia assembly is still unclear. To gain a better understanding of how myosin 15 works, the researchers set out to produce and purify the protein.

“Most classes of myosin have been purified and studied at some level. Myosin 15 belongs to one of the few remaining classes that we know little about,” said Dr. Bird. “By purifying myosin 15, we can study its characteristics, which helps us understand its function in hair cells and how mutations in this molecule lead to hearing loss.”

Producing myosin 15 proved to be an enormous challenge. The researchers first genetically engineered laboratory-grown cells to make a fragment of mouse myosin 15 that contained the protein’s “motor.” Although the cells produced plenty of the protein, the myosin aggregated into large clumps that were useless for biochemical analysis.

After several years of testing different experimental conditions, the researchers looked to nature to help them solve the problem of protein aggregation. Inside cells, proteins known as chaperones help other proteins fold into their unique shapes and prevent them from aggregating. The researchers reasoned that with the help of chaperones, they might be able to isolate soluble protein that they could study.

To test this idea, the researchers engineered the cells to produce two additional chaperone molecules (UNC45B and HSP90AA1), as well as the myosin 15 motor fragment. Previous studies had shown that these chaperones were involved in helping skeletal myosin to fold correctly in animals, but this effect was thought to be specific to muscles.

Their strategy proved successful—and allowed them to isolate large quantities of pure myosin 15. In collaboration with NHLBI researchers, the NIDCD research team was able to show that myosin 15 was “barbed-end” directed, and correctly geared to move large distances along stereocilia while using actin filaments as a highway.

“We are excited to see if chaperone co-expression might similarly be applied to cardiac and skeletal muscle myosins, where large amounts of purified human protein are needed for screening small molecule therapeutics to treat muscle disorders,” noted Thomas B. Friedman, Ph.D., chief of the NIDCD Laboratory of Molecular Genetics. Dr. Friedman and James R. Sellers, Ph.D., senior investigator in the NHLBI Laboratory of Molecular Physiology, are senior authors of the paper. “We are actively pursuing this with Dr. Sellers’ team at the NHLBI,” Dr. Friedman added.

NHLBI researchers Harry Takagi, Ph.D., Neil Billington, Ph.D., and Marie-Paule Strub, Ph.D., were contributing authors on the paper. Support for this work was provided by intramural funds from the NIDCD (DC000039-17) and from the NHLBI (HL004243-12).