Seeing a lone molecule up close and personal just got faster and easier thanks to a new technique developed by scientists at the National Institute on Deafness and Other Communication Disorders (NIDCD) and the Eunice Kennedy Shriver National Institute of Child Health and Human Development (NICHD). 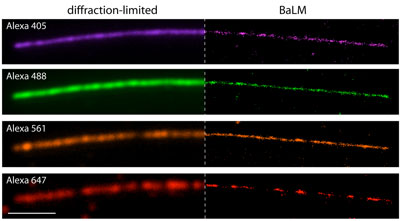 “The technique is very practical and very accessible,” said Bechara Kachar, M.D., head of the NIDCD Laboratory of Cell Structure and Dynamics and senior author on the study. “It doesn’t require further technical development and the software is freely available. We hope that more researchers will take advantage of it.” The study appears in the December 13, 2011, advance online issue of the Proceedings of the National Academy of Sciences.

Even the most powerful light microscope has built-in limitations, which scientists have developed ingenious ways to get around. For example, microscopic structures can be tough to discern, even when amplified thousands of times. One method is to label them with something vivid and measurable, such as a molecule that absorbs and gives off light. One such biological label, or “probe,” is called a fluorophore.

A fluorophore is a bit like a pedestrian wearing a Day-Glo vest at night: If you see the vest, you can bet there’s a person underneath. If you see the fluorophore, you can safely assume a molecule is occupying that very same spot.

Over time, as the fluorophores emit the light they have absorbed, they blink off, like a starburst of fireworks fading in the night sky. They also bleach (lose color). Dr. Kachar’s team wondered if measuring these changes could help track where individual molecules are, even though most scientists tended to think this technique was too challenging. To find individual molecules within the complex organization of cells, they had to overcome a problem: cellular structures are made of many molecules which don’t always line up neatly.

“Fluorescence images often look like blobs, as a result of molecules overlapping all over one another,” said first author Dylan T. Burnette, Ph.D., a National Institute of General Medical Sciences Pharmacology Research Associate (PRAT) Fellow working in the laboratory of Jennifer Lippincott-Schwartz (NICHD).  The images have blurred edges that make them difficult to view. Seeing them more precisely would require more elaborate and costly equipment and expertise—at least that was the conventional opinion.

“We decided to try a procedure based on recording images of the samples as the fluorophores undergo their natural bleaching and blinking,” said Dr. Kachar.  Previously, most people regarded bleaching or fading of the fluorescence as a hindrance to obtaining good images.

Called “bleaching/blinking assisted localization microscopy,” or BaLM, the new technique relies on the built-in behaviors of all commonly used fluorescent probes. To detect single molecules, they captured a sequence of blinking and bleaching images and videorecorded them in real time. Then, from each image in the series, they used a copyright-free image-processing software developed at the NIH, called ImageJ, to digitally subtract the next image, which had overlapped the preceding image. This left the earlier image intact, and let them see precisely where each molecule had been. “This was the technical and conceptual leap that was difficult,” said Dr. Kachar.

“If you take a photograph of the foliage of a tree in the summer, you cannot clearly visualize each leaf, although you know they are there. However, in autumn, when the leaves start falling individually, we can pinpoint the location of each leaf as it falls.”

Once they had detected each “fallen” or bleached molecule, they could calculate precisely its original location coordinates, thus producing a comprehensive map of a dense population of molecules that make up a cellular structure.

By mapping the molecular configurations of sets of proteins, the building blocks of cellular structures, scientists can construct models of how various systems in our body work, both healthy and diseased.

“This is a relatively simple and accessible new technique,” said Dr. Kachar. “Any laboratory with a good fluorescence microscope and video camera can implement and benefit from the advantages of this method. Molecular information can now be attained where before there were only fluorescing blobs.”

According to Dr. Kachar, images from the new technology could open the possibility for obtaining more detailed localization information of the molecular hallmarks of diseases in common fluorescently labeled samples.

“We always knew that all the data was there—we just had to reveal it.”