What is noise-induced hearing loss?

Every day, we experience sound in our environment, such as the sounds from television and radio, household appliances, and traffic. Normally, these sounds are at safe levels that don’t damage our hearing. But sounds can be harmful when they are too loud, even for a brief time, or when they are both loud and long-lasting. These sounds can damage sensitive structures in the inner ear and cause noise-induced hearing loss (NIHL).

NIHL can be immediate or it can take a long time to be noticeable. It can be temporary or permanent, and it can affect one ear or both ears. Even if you can’t tell that you are damaging your hearing, you could have trouble hearing in the future, such as not being able to understand other people when they talk, especially on the phone or in a noisy room. Regardless of how it might affect you, one thing is certain: noise-induced hearing loss is something you can prevent.

Who is affected by NIHL?

Exposure to harmful noise can happen at any age. People of all ages, including children, teens, young adults, and older people, can develop NIHL. Based on a 2011-2012 CDC study involving hearing tests and interviews with participants, at least 10 million adults (6 percent) in the U.S. under age 70—and perhaps as many as 40 million adults (24 percent)—have features of their hearing test that suggest hearing loss in one or both ears from exposure to loud noise. Researchers have also estimated that as many as 17 percent of teens (ages 12 to 19) have features of their hearing test suggestive of NIHL in one or both ears (Pediatrics 2011), based on data from 2005-2006.

NIHL can be caused by a one-time exposure to an intense “impulse” sound, such as an explosion, or by continuous exposure to loud sounds over an extended period of time, such as noise generated in a woodworking shop.

Recreational activities that can put you at risk for NIHL include target shooting and hunting, snowmobile riding, listening to MP3 players at high volume through earbuds or headphones, playing in a band, and attending loud concerts. Harmful noises at home may come from sources including lawnmowers, leaf blowers, and woodworking tools.

Here are the average decibel ratings of some familiar sounds:

Your distance from the source of the sound and the length of time you are exposed to the sound are also important factors in protecting your hearing. A good rule of thumb is to avoid noises that are too loud, too close, or last too long.

How can noise damage our hearing?

To understand how loud noises can damage our hearing, we have to understand how we hear. Hearing depends on a series of events that change sound waves in the air into electrical signals. Our auditory nerve then carries these signals to the brain through a complex series of steps. 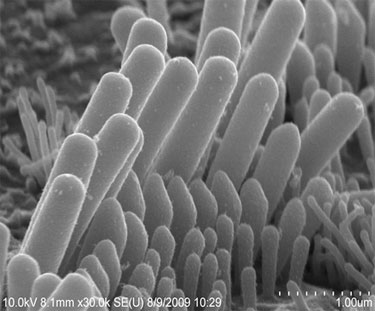 Stereocilia perch atop sensory hair cells in the inner ear.

Most NIHL is caused by the damage and eventual death of these hair cells. Unlike bird and amphibian hair cells, human hair cells don’t grow back. They are gone for good.

What are the effects and signs of NIHL?

When you are exposed to loud noise over a long period of time, you may slowly start to lose your hearing. Because the damage from noise exposure is usually gradual, you might not notice it, or you might ignore the signs of hearing loss until they become more pronounced. Over time, sounds may become distorted or muffled, and you might find it difficult to understand other people when they talk or have to turn up the volume on the television. The damage from NIHL, combined with aging, can lead to hearing loss severe enough that you need hearing aids to magnify the sounds around you to help you hear, communicate, and participate more fully in daily activities.

NIHL can also be caused by extremely loud bursts of sound, such as gunshots or explosions, which can rupture the eardrum or damage the bones in the middle ear. This kind of NIHL can be immediate and permanent.

Loud noise exposure can also cause tinnitus—a ringing, buzzing, or roaring in the ears or head. Tinnitus may subside over time, but can sometimes continue constantly or occasionally throughout a person’s life. Hearing loss and tinnitus can occur in one or both ears.

Sometimes exposure to impulse or continuous loud noise causes a temporary hearing loss that disappears 16 to 48 hours later. Recent research suggests, however, that although the loss of hearing seems to disappear, there may be residual long-term damage to your hearing.

Can NIHL be prevented?

NIHL is the only type of hearing loss that is completely preventable. If you understand the hazards of noise and how to practice good hearing health, you can protect your hearing for life. Here’s how:

What research is being done on NIHL?

The National Institute on Deafness and Other Communication Disorders (NIDCD) supports research on the causes, diagnosis, treatment, and prevention of hearing loss. NIDCD-supported researchers have helped to identify some of the many genes important for hair-cell development and function and are using this knowledge to explore new treatments for hearing loss.

Researchers are also looking at the protective properties of supporting cells in the inner ear, which appear to be capable of lessening the damage to sensory hair cells upon exposure to noise.

The NIDCD sponsors It's a Noisy Planet. Protect Their Hearing®, a national public education campaign to increase awareness among parents of preteens about the causes and prevention of NIHL. Armed with this information, parents, teachers, school nurses, and other adults can encourage children to adopt healthy hearing habits.

Where can I find additional information about NIHL?

Use the following keywords to help you find organizations that can answer questions and provide information on NIHL:

*Note: PDF files require a viewer such as the free Adobe Reader .

END_OF_DOCUMENT_TOKEN_TO_BE_REPLACED

Protecting kids' hearing: Why it matters

Many sources of noise can damage kids' hearing, but noise-induced hearing loss is 100% preventable.